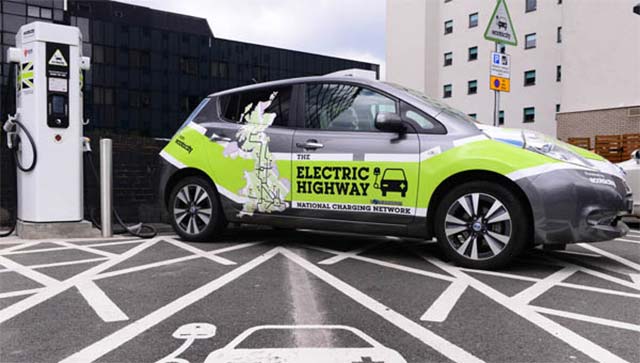 EV drivers in the UK have been able to enjoy free charging on Ecotricity’s ‘Electric Highway’ since 2011, but that’s about to change.

From Monday, owners of electric and plug-in hybrid vehicles will have to pay £5 for a 20-minute rapid charge at its 300 fast-charging stations across the country.

According to Ecotricity, it would still be “significantly less” than the cost of running a petrol or diesel car.

Ecotricity says the usage of its charging points trebled in 2015, and in a statement said: “it has been so successful in encouraging the uptake of electric cars that it is now necessary to start charging for the service in order to maintain and grow the network.”

Ecotricity added: “The combination of more cars on the road and faster charging means we’re now delivering two million miles of clean driving each month – all powered from the wind and sun. That’s a great result. It’s also a growing cost. And to keep pace with demand, we need to build more electricity pumps – at existing and new locations. So the time has come for us to charge – for charging. We’ve taken a lot of feedback from EV drivers in order to arrive at the right pricing model. We’ve decided that a simple flat fee of a fiver for a 20 minute fast charge strikes the right balance.”

The almost 40,000 members of the Electric Highway will need to download a new mobile phone app to make payments, which will have the added functions of a ‘live feed’ of the entire network, so users can see the location and availability of their nearest pump, making it easier for you to plan your journeys.

A new mobile phone app will replace the current card system, which will be available for Apple and Android devices and will enable users to manage their accounts, pay for charging and check the status of chargers all in one place.

The switch to charging will be manually implemented at all charging points, with work starting on 11 July and expected to be completed by Friday 5 August. This will mean that the changeover to the app payment system will be gradual, with some chargers continuing to work via the free card system later than others.

The company has 296 charging points across the country, of which 276 are rapid chargers, and it expects to double the number of chargers in two years and introduce some to cities.

The move to charge for electricity could mean charging plug-in hybrid models at motorway services will become financially uneconomical because of their limited electric-only ranges.

EV drivers will still be able to charge at home and at public (non-Ecotricity) chargers, and Tesla drivers will continue to use the company’s supercharger network at no cost.

Chargemaster, a rival electric charging point company, introduced a monthly price for use of its charging points around two years ago, costing from £7.85 a month.