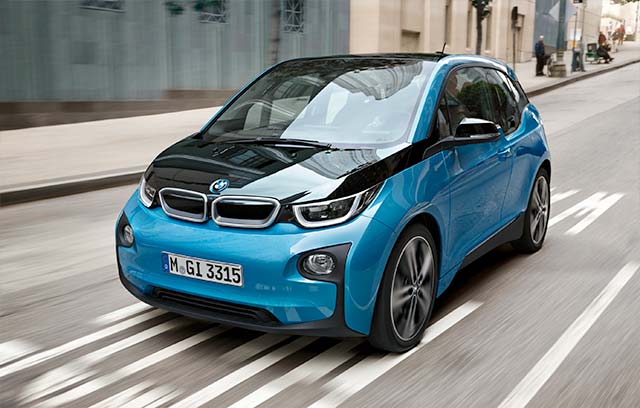 BMW i will offer a new model range of its compact electric car, the BMW i3 and from the 2017 model year will be offering a new version with more than 50% increased battery capacity.

The 2017 BMW i3 (94 Ah) has a capacity of 33 kilowatt hours (kWh) thanks to the higher energy density of the lithium ion cells. The BMW i team worked to ensure that the battery dimensions remain unchanged while still offering a significant range increase.

Even in everyday conditions, the new Battery Electric BMW i3, in varying weather conditions and with the air conditioning or heating turned on, a range of up to 114 miles combined (hwy/city) is possible as shown by independent BMW testing cycles. The driving performance figures of the 170 hp AC synchronous electric motor remain virtually unchanged.

The motor propels the BMW i3 from 0 to 60 mph in just over 7 seconds. This makes the BMW i3 both the sportiest and most efficient electric vehicle in its segment with an expected EPA electricity consumption of 27 kWh/100mi. In addition to the Battery Electric BMW i3, the Range Extender model will also feature the 94 Ah battery. When equipped with the Range Extender, if the driver requires additional range, the 2-cylinder gasoline engine is switched on once the battery is depleted to 6.5% state of charge and keeps the charge level of the battery constant while driving and provides an additional range thanks to a 25% larger fuel tank (2.4 gallons).

With the introduction of the BMW i3 (94 Ah), BMW i now also offers a new BMW Home Charger Connect, a residential charging station designed for comfortable and fast home charging featuring additional connected functions. Pricing for the 2017 BMW i3 (94 Ah) will be released closer to market launch.

Higher storage density of the battery cells
The BMW i3 (94 Ah) sets a new benchmark in its segment with 94 ampere hours (Ah) cell capacity, 33 kWh total battery energy, and an electric range of approximately 114 miles combined (hwy/city) on one full battery charge. Consuming only 27 kWh/100mi the BMW i3 is the most efficient car in its segment with the lowest electricity consumption costs of approximately 2.81 USD/100mi. 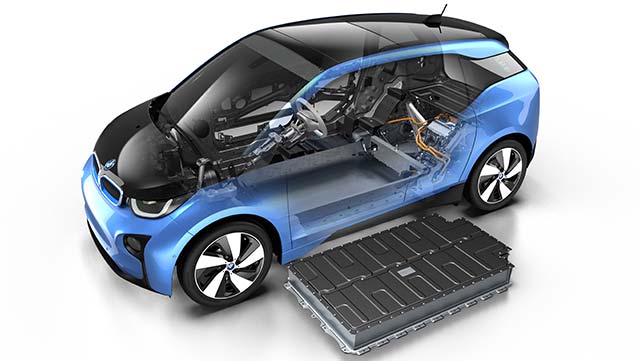 The high-voltage battery of the BMW i3 consists of eight modules with twelve storage cells each and its capacity has increased by more than 50% without any changes in exterior dimensions. By optimizing the cell-internal packages with more electrolyte and adapting the active material, BMW and Samsung SDI have succeeded in increasing cell capacity to 94 Ah and overall battery energy to 33 kWh of which 27.2 kWh can be effectively used. The previous battery of the BMW i3 (60 Ah) produced 22 kWh (gross)/19 kWh (net).

The lithium ion cells used, set themselves apart in the competitive field by achieving a special balance between high energy density, cycle stability and safety in the case of an accident. The high-voltage battery also has an advanced thermal management system that keeps the battery operating in the optimal temperature range, which further enhances performance. For example, the coolant of the air conditioning system is responsible for cooling the high-voltage battery very effectively, while a heating system can also be used to warm the battery to ensure the optimal operating temperature before starting off. Customers receive an 8-year/100,000-mile High-voltage Battery Warranty.

Optimized performance delivery, more efficient drive
The BMW i3 is by far the lightest car in its segment. Despite the slight weight increase, at 2,961 lbs (BEV), and 3,234 lbs (REX), the BMW i3 (94 Ah) is characterized by driving performance, which is subjectively as agile as the 60 Ah model variant. The BMW i3 (94 Ah) is also powered by the same 3 phase AC synchronous electric motor developed in-house by the BMW Group. The motor generates an output of 170 hp and delivers 184 lb-ft of torque which is available as soon as the electric motor begins to turn. 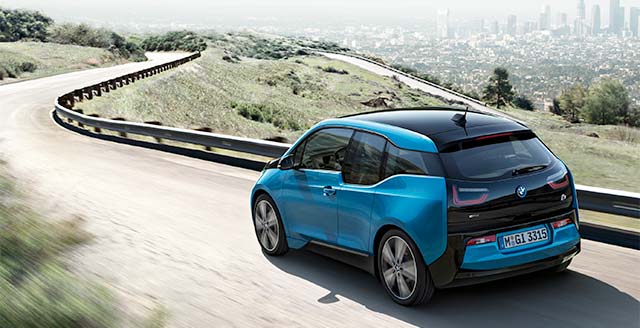 The BMW i3 (94 Ah) accelerates from 0 to 60 mph in just over 7 seconds. The impressive electric motor, small turning circle of 32.3 feet, – a major benefit to driving in the city – BMW’s near-perfect 50-50 weight distribution, precise electric power steering and the stable suspension set-up help to make the i3 as satisfying to drive as every other BMW.

The sporty character of the BMW i3’s electric motor is also clearly noticeable by its performance figure of 5.1 seconds accelerating from 50 to 75 mph. This is a decisive factor for enabling fast and safe passing maneuvers, and is normally only achieved by combustion engine powered cars with considerably higher outputs. The BMW i3 (94 Ah) is close to the level of cars such as the (320 hp) BMW 340i. Power is transmitted to the rear wheels via the single-speed transmission, which the BMW i3 uses to accelerate without torque interruption to its electronically limited top speed of 93 mph.

The electric consumption of the BMW i3 (94 Ah) has also been reduced by a large number of detail improvements including revised electric motor management as well as advanced low-resistance tires with optimized compound.

Charging times
The 7.4 kW charging electronics of the BMW i3 (94 Ah) can charge the 33 kWh battery in approximately 4.5 hours using a Level 2 charger, which is slightly more than the approximately 3.5 hours required to charge the battery on a BMW i3 (60 Ah). Standard equipment of the BMW i3 includes the occasional use cable for connecting it to a domestic power socket. Core elements such as range, hallmark BMW agility thanks to low weight and overnight battery charging remain in place. 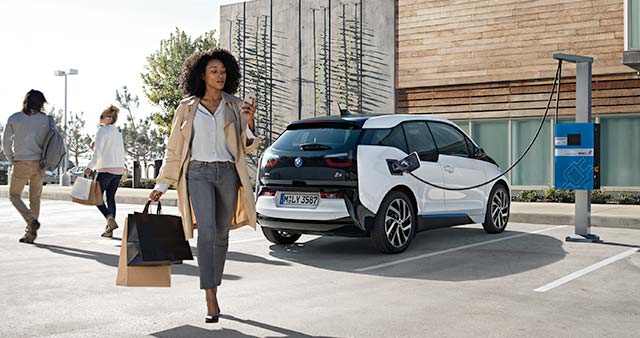 Range Extender for even greater range
BMW i also offers a Range Extender for the BMW i3 (94 Ah).The range of the BMW i3 is extended by a 650 cc 2-cylinder gasoline engine which is located adjacent to the electric drive above the rear axle. The Range Extender engine delivers a maximum output of 38 hp and powers a generator in order to produce electricity, working on a required-based and highly efficient principle. For those occasional times where additional range is required, as soon as the charging level of the lithium ion batteries drops to a specified level, the Range Extender kicks in to keep the charging level constant effectively extending the range.

Fitting the car with the Range Extender has no influence on the available luggage volume: the luggage compartment volume remains unchanged at 15.1 ft3 and can be extended to 36.9 ft3 with the rear seats folded down. The BMW i3 (94 Ah) now features a 2.4 gallon fuel tank improving the range from the previous model.

The BMW i3 (94 Ah) with Range Extender weighs approximately an extra 270 lb compared to the Battery Electric BMW i3 but is also characterized by a high level of agility and offers impressive performance figures. It accelerates from zero to 60 mph in just 8 seconds.

The Deka World is now part of the standard profile of the BMW i3 (94 Ah) and features a lightweight dark cloth fabric interior made from recycled materials. Other changes to the standard profile include the addition of the Universal Garage Door Opener, Advanced Real-Time Traffic Information, and Comfort Access.

As part of the Tera World, a Dark Oak Wood trim is also now included, with an alternative Light Eucalyptus Wood trim available as well. These trims are also available for ordering with the Giga World.

The highly anticipated electric moonroof is also available for ordering for the first time in the US. This option features individual shades and adds to the great set of convenience features that the BMW i3 has to offer.

The BMW Home Charger Connect comes standard with WiFi and will feature innovative charging services which can be accessed remotely. This charger helps preserve vehicle range as it can precondition the vehicle battery when connected.

The BMW i3 is equipped with the future-proof 50 kW direct current (DC) Fast charging technology. When the BMW i3 (94 Ah) is connected to a DC Fast charging station, the battery cells are charged up to 80 percent of their capacity in less than 40 minutes. In the BMW i3 (60 Ah) this takes approximately 25 minutes.

ConnectedDrive
The optional Navigation System Professional provides BMW ConnectedDrive Services especially developed for BMW i. The range assistant follows the planned and currently driven route. If the destination selected in the navigation system is beyond the car’s range, the driver receives the suggestion to shift to the ECO PRO or ECO PRO+ mode. Additionally, the system calculates a more efficient alternative route. Should it be necessary to recharge at a public charging station, the driver is shown all the available stations along the planned route. 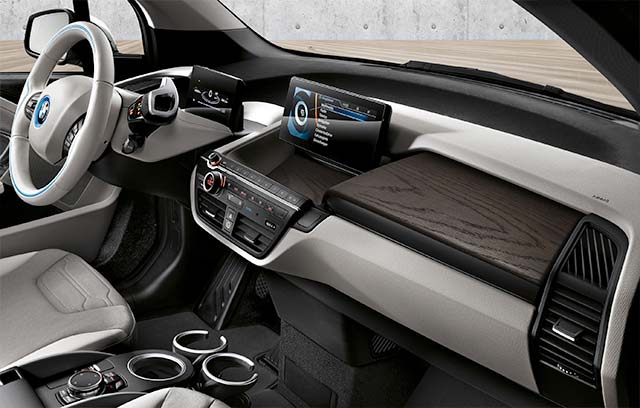 A dynamic range map is another central element of the connected navigation unit. Apart from the current charging status of the battery, the driving style, the activated electric comfort functions and the selected driving mode, the topographic features, the current traffic situation and the outside temperature are all taken into consideration. The Advanced Real Time Traffic Information (ARTTI) data is used for this purpose. The data is provided by the BMW ConnectedDrive Server.

The BMW i3 also sets standards when it comes to connecting driver and car. The BMW i Remote App provides useful vehicle-related mobility planning data available on the customer’s smartphone. Apart from pedestrian navigation; navigating your way to your destination from the parking space and back, BMW ConnectedDrive offers a so-called intermodal routing system and for the first time in combination with the Navigation System Professional. This also incorporates public transport connections such as subway stops if this means you can reach your destination quicker. From the actual trip in the BMW i3, looking for a parking space, changing onto a metro and or a walking route, the BMW i ConnectedDrive services take the customer to his destination efficiently.