Volkswagen, a partner in the SLAM research project, unveils the “Golden Test Device” at Hannover Messe 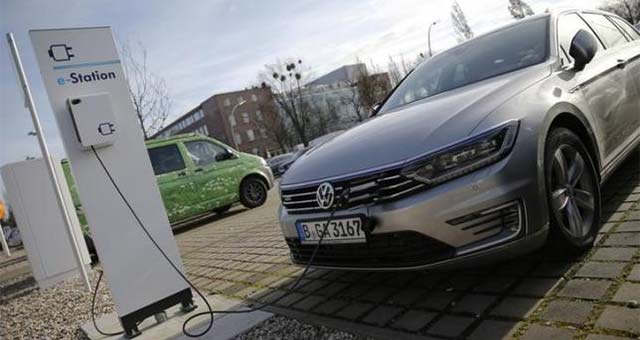 Volkswagen is working with partners from industry and science on the Federal Ministry for Economic Affairs and Energy’s SLAM research project (“Fast charging network for road axes and metropolitan areas”).

The aim is to establish a research network focussing on plug-in hybrids and electric vehicles by means of quick charging stations on key traffic routes and intersection points to enable the onward journey. Such a charging infrastructure is an important step towards promoting electric mobility in Germany. A central component of SLAM is the “Golden Test Device” prototype co-developed by Volkswagen which was unveiled at the Hannover Messe industrial trade show.

Volkswagen showcased a prototype of the “Golden Test Device” at the joint stand of the United States Department of Energy/ANL and the Joint Research Centre of the European Commission at the Hannover Messe. Volkswagen took into account all the technical requirements for vehicles and charging stations and defined various test scenarios in collaboration with national and international partners to develop the device.

SLAM’s mission includes setting up a fund-based research network of up to 600 fast-charging stations to collect basic data for the research and analysis of suitable charging infrastructures according to the CCS-DC standard (combined charging system). This includes simulation and location scenarios to forecast demand for new charging stations, developing business models for site operators and a uniform access and billing system.

The SLAM project has a total budget of € 12.9 million and will receive support from the Federal Ministry for Economic Affairs and Energy to the extent of € 8.7 million by August 2017. The Federal government designated SLAM as one of seven “flagship projects in electric mobility” at the “National Conference for Electric Mobility” in Berlin in June 2015.