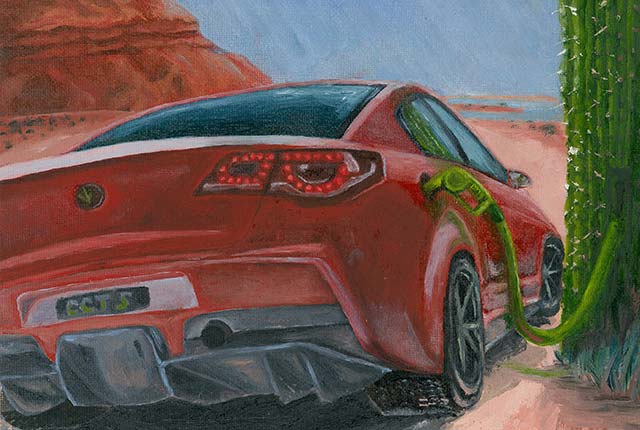 Inspired by the humble cactus, a new type of membrane has the potential to significantly boost the performance of fuel cells and transform the electric vehicle industry.

The membrane, developed by scientists from CSIRO and Hanyang University in Korea, was described in the journal Nature.

The paper shows that in hot conditions the membrane, which features a water repellent skin, can improve the efficiency of fuel cells by a factor of four.

According to CSIRO researcher and co-author Dr Aaron Thornton, the skin works in a similar way to a cactus plant, which thrives by retaining water in harsh and arid environments.

“Fuel cells, like the ones used in electric vehicles, generate energy by mixing together simple gases, like hydrogen and oxygen,” Dr Thornton said.

“At the moment this is achieved by placing the cells alongside a radiator, water reservoir and a humidifier.

“The downside is that when used in a vehicle, these occupy a large amount of space and consume significant power.”

“A cactus plant has tiny cracks, called stomatal pores, which open at night when it is cool and humid, and close during the day when the conditions are hot and arid,” Dr Doherty said.

“This helps it retain water.

“This membrane works in a similar way. Water is generated by an electrochemical reaction, which is then regulated through nano-cracks within the skin.

“The cracks widen when exposed to humidifying conditions, and close up when it is drier.

“This means that fuel cells can remain hydrated without the need for bulky external humidifier equipment.

“We also found that the skin made the fuel cells up to four times as efficient in hot and dry conditions.”

Professor Young Moo Lee from Hanyang University, who led the research, said that this could have major implications for many industries, including the development of electric vehicles.

“At the moment, one of the main barriers to the uptake of fuel cell electric vehicles is water management and heat management in fuel cell systems,” Professor Lee said.

“This research addresses this hurdle, bringing us a step closer to fuel cell electric vehicles being more widely available.

“This technique could also be applied to other existing technologies that require hydrated membranes, including devices for water treatment and gas separation.”

The cross-continent team has been working together for over 10 years.

For this study, Hanyang University conceived and designed the experiments. Using characterisation and modelling expertise, CSIRO researchers were then able to determine how the membranes behaved under changing humidities.