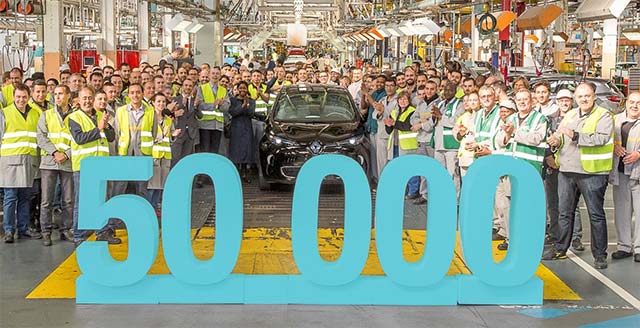 The 50,000th Renault ZOE has rolled off the production line at its specialist plant at Flins. The milestone vehicle was sold to Sylvie, a French citizen from Saint Cloud, Paris.

Guillaume Berthier, Electric Car Sales and Marketing Director, presented Sylvie  with the keys to her ZOE at the Flins plant near Paris, the only ZOE site for global distribution. It was Sylvie’s children who encouraged her to choose a ZOE and she intends to use it every day.

With 50,000 people now proud owners of the ZOE, Renault has found that 98% of customers are satisfied with their 100% electric-in-use vehicle.

Most recently, the ZOE was voted second best vehicle overall in the Auto Express Driver Power survey – one of the largest motoring consumer surveys in the UK, and has also been crowned What Car?’s ‘Best Electric Car under £20,000’ for three consecutive years.

Charging a ZOE couldn’t be easier thanks to the continuing rollout of new infrastructure. Today, more than 60,000 charge points are available to the public in Europe.