Toyota Mirai Launches In Sweden And Norway This Summer 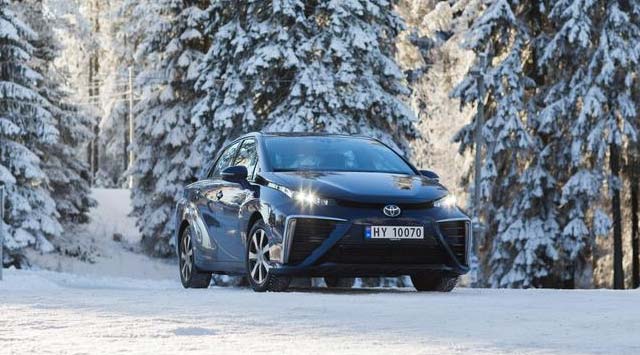 The future is around the corner for citizens of Sweden and Norway who show interest in Toyota’s zero emissions fuel cell car, the Toyota Mirai (‘Future’ in Japanese).

Starting this summer, both Nordic countries will start deliveries following other European countries that have introduced the Toyota Mirai in 2015 (UK, Germany and Denmark) or early 2016 (Belgium) – with the Netherlands to follow later this year.

The Mirai has been launched in Japan in December 2014 and is sold outside of Europe in the US since 2015.

In Norway the launch comes at a time when on top of the 5 existing hydrogen stations in the east of the country, two local hydrogen providers (HyOP and Uno-x) have committed to add more than 20 hydrogen stations across the country by 2020. The hydrogen stations are also expected to be a priority in the 2018-2029 National Transport Plan that comes with additional funding. Toyota customers can enjoy the same benefits of electric vehicles, i.e. VAT and tax exemptions on purchase, access to bus lanes and free toll.

Similar to neighbouring Norway, Sweden already has a number of hydrogen stations in cities such as Stockholm, Gothenburg and Malmö, with more in the pipeline to open later this year (Mariestad and an additional station in the capital Stockholm). In Sweden hydrogen can easily be sourced as it is locally produced 100% based on renewable energy, just like in Denmark.

The number of Toyota Mirai cars sold in both countries will initially be relatively small to eventually increase significantly in the years leading up to 2020. Toyota estimates selling around 30,000 units a year globally in 2020 from 3,000 units by 2017. Since the car does not emit anything else but water vapour whilst driving, the Toyota Mirai is expected to contribute to reach the Toyota Environmental Challenge 2050 which, amongst others, aims at reducing CO2 emissions by 90% in 2050 compared to 2010 levels.