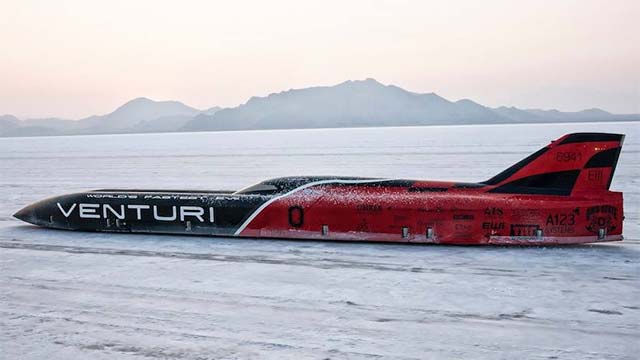 The long process to prepare for this year’s trip to the Bonneville Salt Flats resumed in early January in the Venturi Buckeye Bullet 3 (VBB-3) workshop in Columbus, Ohio, USA. This vehicle is part of an ongoing project by the Venturi Buckeye Bullet racing team which began in 2009 as a partnership between Venturi Automobiles and the Ohio State University Center for Automotive Research (CAR).

The team’s first world landspeed record was achieved that year with a hydrogen fuel cell vehicle at 487km/h (303mph). Next, in 2010 the team returned to the salt flats with a fully electric battery powered vehicle, the VBB-2.5 which set another world record at 495km/h (307mph).

Subsequent attempts by Venturi to break their own world record were put off by bad weather, with flooding in 2013 and slush in 2015.

Venturi’s partner in the project, the students at The Ohio State University’s Center for Automotive Research, have dismantled the 12 meter long electric streamliner to examine each and every mechanical and electrical component which includes nearly 3.5 miles of cables and 2,000 cells in eight battery packs. These are the first of many steps toward the vehicle’s return to Utah’s Bonneville Salt Flats. “Along with our partners at CAR, we are aiming to exceed our own electric FIA Land Speed Record established in 2010 with the previous model – the Venturi Buckeye Bullet 2.5. We want to show all the potential of this very unique prototype” said Venturi’s lead project engineer Delphine Biscaye.

This project provides a unique research and development challenge for Venturi Automobiles. The car is a fantastic test benchmark for high performance electric powertrain design, as well as extreme operation in harsh conditions. Each component of the vehicle was studied, designed, and built for a specific application that is widely different than conventional automotive use. The scope of work on the VBB-3 allows for innovation in the fields of electric propulsion and energy efficiency, which are two prominent challenges in the automotive industry and in racing. Venturi Automobiles is also a vehicle manufacturer in the FIA Formula-E championship and is running its own racing team – The Venturi Formula-e Team. The experience with the VBB-3 brings another unique dimension to the development of the Formula-e program.

For Venturi’s partner, the Ohio State University, and its 25 young student engineers, the project offers an opportunity to be exposed to the realities of advanced vehicle development in the fast paced world of racing. Their experience in the development and implementation of cutting edge automotive technology provides an experience like no other in the world. Recent graduate Evan Maley said: “Working on the VBB-3 project allowed me to have a lot of connections when it came time to interview for jobs. During those interviews the VBB-3 was the biggest thing I talked about. People were very interested in the activities I have been involved in and how I managed my time between academics and working on the VBB-3”

The VBB-3 program has a passionate club of supporters who are focused on innovation and sustainable mobility and who generously make donations in support of the record attempt and logistics of sending a team of 25 engineers and students to the Salt Flats in 2016.