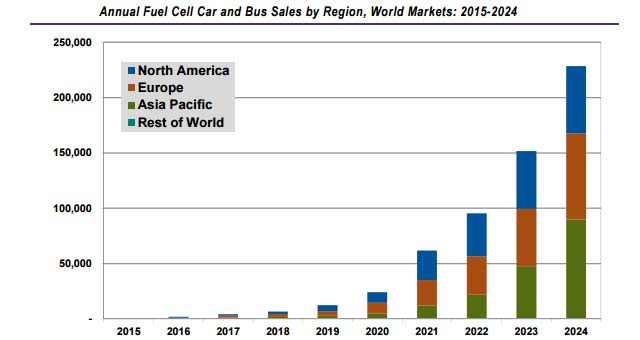 Fuel cell vehicles (FCVs) are once again in the public eye, thanks to Toyota’s rollout of its first production-level fuel cell car, the Mirai, in 2015.

The Mirai joins Hyundai’s fuel cell-powered Tucson as the only commercially available fuel cell cars today as this market continues to focus on two key requirements for larger-scale commercial introduction. The first is driving down the vehicle cost so fuel cell cars and buses can approach the cost of battery and hybrid technology, and the second is developing the hydrogen infrastructure needed to fuel these vehicles.

Interest in the light duty vehicle (LDV) sector lies in the huge potential market for long-range emissions-free vehicles if the price and performance of the vehicles meet customer expectations.

With annual global sales of LDVs at around 82 million, capturing a small percentage of this would make LDVs the biggest market for fuel cell systems. Yet, the LDV market is tough to crack, and even technologies such as hybrids that have been commercial for well over a decade capture only 5% or less of annual sales in most markets.

Moreover, FCVs must compete with battery electric vehicles (BEVs), which have been available as commercial products since 2010. One benefit of FCVs over BEVs is that FCVs can offer better range combined with fast fueling. If hydrogen stations were ubiquitous, FCVs could compete well against BEVs.

Hydrogen infrastructure does not pose the same constraint for transit buses since those vehicles utilize a central fueling station. Rather, the fuel cell bus market is focused on continued cost reduction in the fuel cell systems and systems integration. Fuel cell bus system developers are focused on working with bus manufacturers to bring down cost through larger volume production or using lower-power fuel cells.

A new report from Navigant Research analyzes the market for fuel cell passenger cars and buses, including its drivers and barriers, with global sales forecasts, through 2024. According to Navigant Research, annual sales of FCVs are expected to exceed 228,000 by 2024.

“Commercial FCVs are finally available to drivers in select markets, with early indications of real customer interest and signs that manufacturers are getting serious about pricing FCVs to compete at the premium-vehicle level,” says Lisa Jerram, principal research analyst with Navigant Research. “Automakers serious about fuel cell technology are expected to tackle the fueling infrastructure problem head on, with much needed investments in station buildout.”

Until the infrastructure is available, the market for FCVs is expected to remain supply-constrained, with vehicle production at low levels, according to the report. To facilitate the creation of FCV infrastructure, automakers are collaborating with new partners in retail fueling and hydrogen supply.