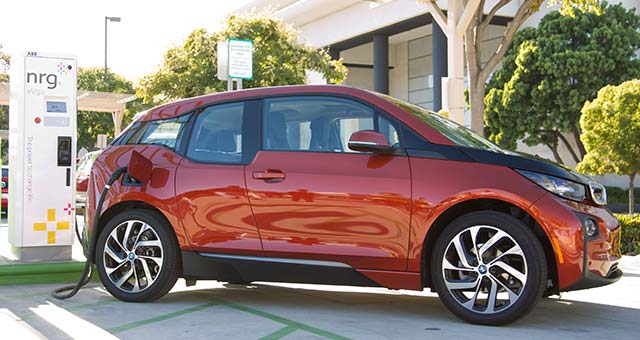 With the United Nations Conference on Climate Change underway in Paris, New York City Mayor Bill de Blasio announced the launch of NYC Clean Fleet: a comprehensive plan to create the largest electric vehicle fleet of any U.S. city, cut municipal vehicle emissions in half by 2025 – and 80 percent by 2035 – and serve as a model for the private sector and other 21st century cities in fighting climate change.

“A cleaner, greener fleet is yet another step toward our ambitious but necessary sustainability goals, including an 80 percent reduction in all emissions by 2050,” said Mayor Bill de Blasio. “By building the largest municipal electric vehicle fleet in the country – and potentially the world – New York City is continuing to lead by example. Cities are setting the pace on climate action – and with our city and our planet’s very future at stake, we need national leaders in Paris to take note and take action.”

NYC Clean Fleet is the latest in a series of ambitious but necessary climate initiatives outlined in Mayor de Blasio’s OneNYC plan, with a long-term goal of reducing all greenhouse gas emissions across the city 80 percent by 2050.

The plan will also expand the use of anti-idling devices in sanitation trucks and other heavy-duty vehicles to reduce emissions, and increase the use of biodiesel and natural gas.

NYC Clean Fleet will do the following:

– Replace approximately 2,000 fossil fuel sedans with plug-in electric vehicles (EVs), which, combined with the over 300 EVs currently on the road, would mean EVs will make up half of the City’s non-emergency sedans and create the largest municipal electrical vehicle fleet in the United States and, potentially, the world. Sedans are the single largest category of vehicles in the City fleet, and this transition would reduce gasoline consumption by approximately 2.5 million gallons a year and reduce the City fleet’s emissions by nine percent by 2025.

– Expand the use of anti-idling, hybrid, and stop-start technologies in medium- and heavy-duty vehicles, such as sanitation trucks, to substantially reduce emissions and gasoline use while at rest. These technologies can reduce a vehicle’s fuel consumption by up to 33 percent and total fleet emissions by five percent.

– Adopt best-practices in fleet management that limit the usage of SUVs based on specific security or operational needs, promote eco-driving to optimize fuel efficiency through education and training, and expand the use of car and ride sharing to support more efficient vehicle use.

– Partner with private and other government fleets, as well as non-profit groups, while leveraging City purchasing power, to serve as an example and galvanize greener fleets across all sectors.

The City will immediately move to implement NYC Clean Fleet, including through converting light-duty vehicles to EVs through the existing vehicle replacement cycle and identifying additional siting options for EV infrastructure.

Purchasing the new electric vehicles can be done without new operating expenditures, as the relatively marginal additional cost of EVs will be offset by fuel savings, reduced maintenance savings, and increased resale value.

The City expects relatively incremental capital costs over the next ten years to support necessary upgrades to electrical systems in support of new charging capacity.