BYD Topping Toyota, Nissan, Mitsubishi, VW and Even Tesla Volumes by a Landslide 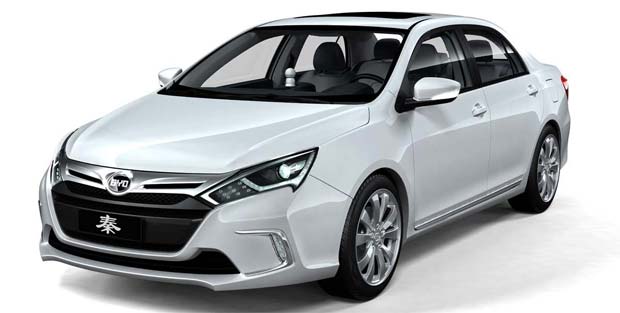 BYD was the first to deliver a truly zero-emissions ecosystem to the world in 2011 (as the only EV manufacturer that also builds low-cost solar panels and environmentally friendly energy storage to power fuel-efficient New Energy Vehicles). But BYD is also now the World’s No. 1 Battery-Electric Vehicle Manufacturer by sales volumes. In a just-released global EV ranking, BYD came in not only first in global, single-model, sales in October, with a total of 6,099 EV units sold, but October’s rankings also represented an even greater milestone as it was the first time BYD also ranked first in accumulated Global sales throughout an entire year – with a total of over 43,073 NEVs sold (a >220% surge compared to last year), exceeding all American, Japanese and European leaders to date.

BYD climbed from the 7th position in late 2014 to the 1st position in under 10 months as the result of a carefully executed strategy and product/feature-value placements in the China markets (with the QIN, Tang and Song launches). BYD is also dominating in the Electric Bus markets where there is no close competition – globally, BYD will deliver nearly 6000 electric buses in 2016, with about 300 zero-emission electric buses scheduled to be built in 2016 from BYD’s North American factory – the Bus & Coach Factory in Lancaster, Calif. These numbers alone (6000 in one year) make BYD The Largest Manufacturer of Electric Buses worldwide and surpassed the entire US 2015 bus market volumes. 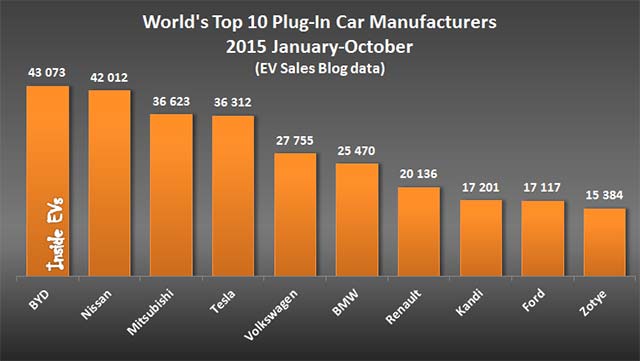 What is BYD’s next move? BYD revealed their go-to-world-markets strategy at the 2015 Shanghai Auto Show with the “7+4 Strategy”. The 7+4 strategy is to change the world by replacing high-utility, fossil-fueled vehicles with clean, efficient, even more reliable EVs for seven on-road vehicle markets in this priority:

As well as four off-road vehicles for specialized applications:

Several EV pilot fleets have been deployed in the United States. Stanford University runs a fleet of electric buses, Green Wheels is running BYD eTaxis in Chicago and another eTaxi fleet is launching in New York City and with the new expansion of the BYD factories planned for the US, a wide-range of EV product offerings will be forthcoming including trucks, forklifts and fleet vehicles. BYD has secured its place in the North America marketplace as a premier EV provider. This news couldn’t have come at a better time with the announcement by New York City’s Mayor Bill de Blasio, “A cleaner, greener fleet is yet another step toward our ambitious but necessary sustainability goals, including an 80 percent reduction in all emissions by 2050. By building the largest municipal electric vehicle fleet in the country – and potentially the world – New York City is continuing to lead by example. Cities are setting the pace on climate action – and with our city and our planet’s very future at stake, we need national leaders in Paris to take note and take action.” Outlined in the Mayor’s plan is to replace approximately 2,000 fossil fuel sedans with plug-in electric vehicles (EVs), which, combined with the over 300 EVs currently on the road in NYC, would mean EVs will make up half of the City’s non-emergency sedans and create the largest municipal electrical vehicle fleet in the United States and, potentially, the world.

As of November 2015, BYD’s eBuses and eTaxis had traveled more than 327 million miles in revenue service with the total equivalent CO2 emissions saved comparable to planting a forest of 581,678 trees.

Citing the discussions at this month’s United Nations Climate Change Conference, newly appointed Director of Eastern U.S. Business for BYD, Lerner-Lam, noted that fossil fuel vehicles will be steadily replaced by environmentally responsible solutions. “The time has come for electric vehicles, and BYD is ready to meet the growing demand,” Lerner-Lam said. “It’s a very exciting opportunity to take technology that was developed in China—and leveraged and matured in large scale there—and adapt them to American standards, lifestyles and infrastructures.”