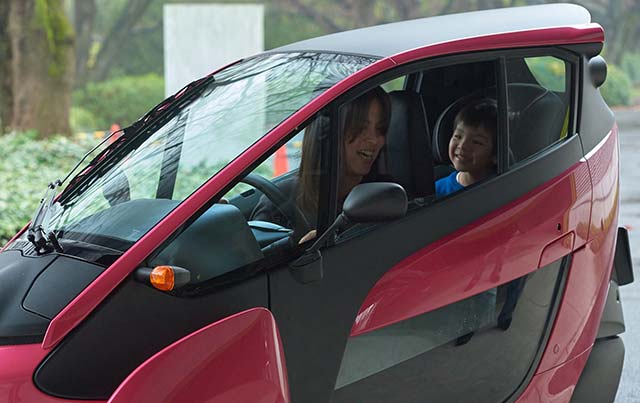 Toyota will begin Japan-based trials of a two-seater version of the i-Road, its short-range ultra-compact electric vehicle.

The trials will be conducted as a part of the Open Road Project launched in July, and will start on November 21 in Tokyo’s Shibuya Ward.

While currently in use as part of a Toyota test project in Grenoble, France, the two-seater model has now received type certification from the Ministry of Land, Infrastructure, Transport and Tourism, making it eligible for use in Japan.

The vehicles will be loaned for periods of approximately one month to users who plan to use them for two-passenger applications. By testing the vehicles in a variety of day-to-day situations such as commuting, shopping, and dropping off and picking up children, Toyota will assess the value of the i-Road in different capacities, including its potential to meet mobility needs that are not currently met.

In order to meet the Japanese government’s type certification requirements, some aspects of the one-occupant vehicle were modified to make two-occupant use viable. These modifications included changes to reflectors and vehicle-width indicators, and the addition of an Approaching Vehicle Audible System.

The municipal government of Tokyo’s Shibuya Ward has expressed interest in the convenience of the i-Road, and will conduct the trials with Toyota in an effort to study the possibility of community-based development for the future.