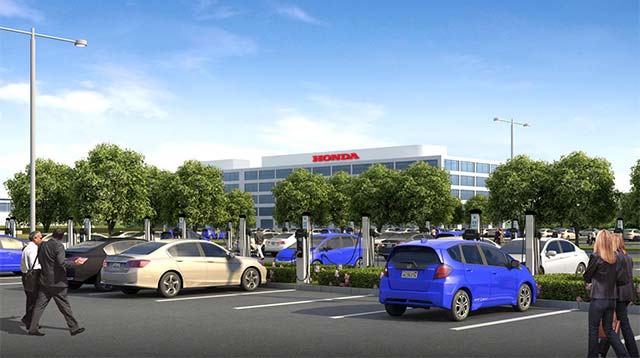 In an effort to increase the use of alternative fuel vehicles by its associates for daily commuting, and to prepare for a new generation of plug-in vehicles set to arrive by 2018, Honda is adding 120 new EV chargers on the Torrance, CA headquarter campus of American Honda Motor Co., Inc.

The new chargers will be installed in two phases, the first of which has already begun. Ultimately, Honda estimates that the chargers will enable hundreds of associates to use an EV for their daily commute.

To support the local community in conjunction with the project, Honda is installing a publicly-accessible DC “fast” charger on Harpers Way, adjacent to its campus, which will enable Torrance residents to rapidly refuel EVs equipped with DC charging capabilities.  The fee-based DC Fast charger will open in early 2016 and will support both the CHAdeMO and SAE Combo standards.

Funding for the project was provided, in part, by a California Energy Commission (CEC) grant. Honda’s announcement coincides with its participation in “Drive the Dream 2015,” an event hosted by the California Plug-in Electric Vehicle Collaborative and attended by Governor Jerry Brown to encourage businesses across the state to install workplace charging.