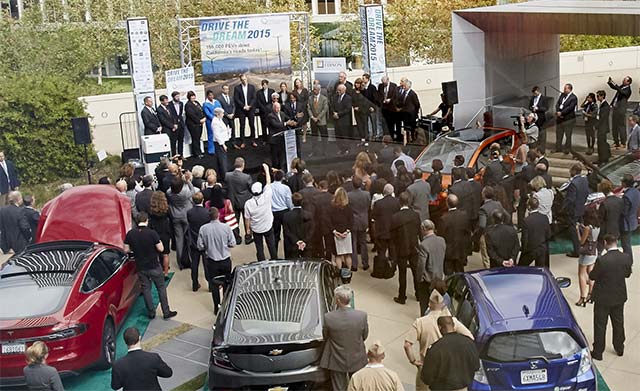 California has set the most aggressive clean transportation goals in the country, including creating a charging network to handle 1 million electric vehicles by 2020.   Businesses and public sector partners have collaborated to initiate innovative programs and policies to enhance workplace charging, fleet vehicles and provide incentives to employees for the purchase of PEVs.

DRIVE THE DREAM 2015 showcased the latest plug-in electric vehicles and charging solutions. The Chevrolet Bolt EV concept car, which will go on sale in California in late 2016, was among the line up of vehicles on display.  The event also featured new technology and programs that are available to California consumers and businesses to spur continued investment and growth in the PEV market.

Significant new investments by companies and public sector partners that were announced at the event included the expansion of vehicle charging stations, purchase of PEVs in fleets and employee incentive programs to help increase investment in California, add jobs, improve air quality and reduce reliance on oil.

Vision Fleet: Vision Fleet announced a goal to work with corporate, government, and other innovative fleets in California to deploy 2,000 PEVs in the state by the end of 2016. To help foster California’s continued leadership in fleet electrification, Vision Fleet committed to working with at least 10 in-state corporate partners to identify and address cost-effective PEV opportunities by the end of the year.