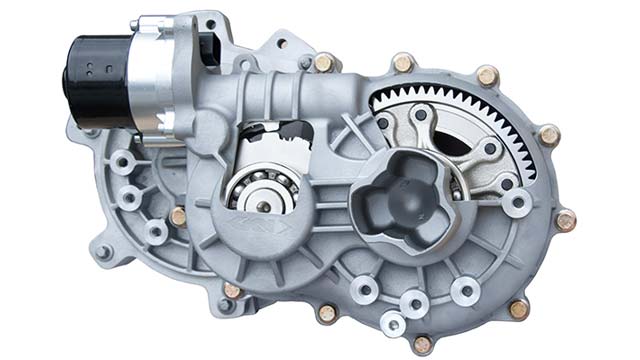 GKN Driveline has developed new electric drive technologies as part of its role in the Concept_e project, a £16 million Government-backed initiative to develop state-of-the-art hybrid and electric powertrain systems.

The technologies were unveiled by Jaguar Land Rover and the project partners at the LCV2015 low carbon vehicle show. The programme was co-funded by Innovate UK, the Government’s innovation agency which works with companies and partner organisations to identify and drive the science and technology that will help grow the UK economy.

GKN has designed, developed and integrated two eAxles into the BEV powertrain, including a single speed and a two-speed transmission. Both eAxles build on existing GKN eDrive technology already in series production on leading hybrid electric vehicles, with GKN’s engineers adapting them for use on a heavier, all-wheel drive SUV platform.

The single-speed eAxle, coupled with an 85 kW electric motor, is utilised on the vehicle’s front axle and has been engineered to operate at 15,000 rotations per minute. The two-speed eAxle, based on the PACE award winning eAxle developed for the BMW i8, helps power the rear wheels and offers electric power across the BEV’s entire speed range. It is coupled with a 145 kW electric motor.

Due to the vehicle’s tight packaging requirements, GKN’s engineers rotated the two-speed gearbox by approximately 120 degrees compared to its series production application.

The combination of the two eAxles allows permanent all-wheel drive capability and high torque at low speed from the 2-speed gearbox for dynamic driving. GKN systems integration capabilities were utilised to assist in the development of software that interfaces between the vehicle and the technology.

The technology was developed by engineers based at GKN Driveline’s Birmingham and Lohmar facilities, with support from colleagues in Italy.