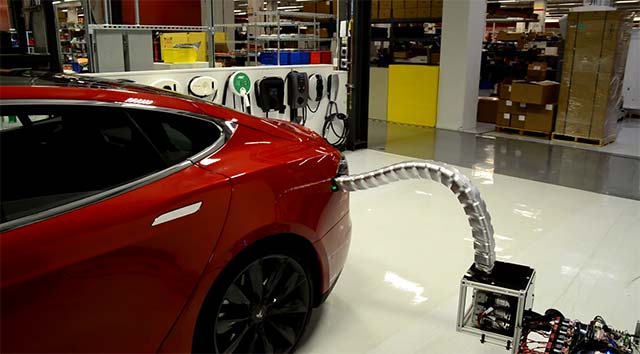 Tesla has given us a glimpse into the future, and it seems to involve somewhat creepy robotic arms that look like snakes.

Tesla Motors unveiled a video showing a prototype of its automatic charger in action. The video begins with the charger in an upright position. But after just a few seconds, the figure begins to move just like a snake – and it’s a little bit unsettling.

The robot manages to find the charging socket, connecting itself with ease and proving that humans are, indeed, becoming more and more obsolete.

Tesla CEO Elon Musk teased the automatic charger last December, when he tweeted that the electric-car company was working on a “solid metal snake” charger “for realz.”

Btw, we are actually working on a charger that automatically moves out from the wall & connects like a solid metal snake. For realz.

For now, the charger remains a prototype, and no timeline has been set for its possible release.