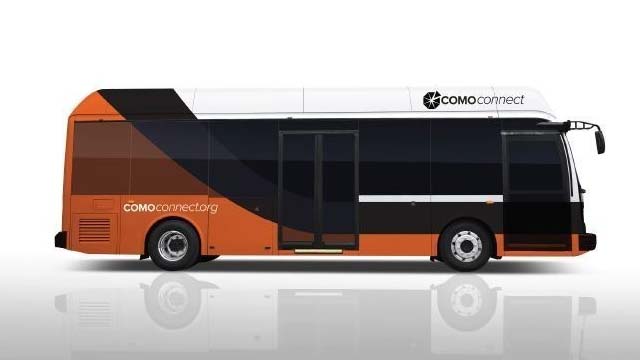 The first bus will be a full-size 40′ transit bus used to experiment on a number of different routes around the city, namely the #1 Black Core Connector, one of the city’s longest and most popular bus routes.  The next three buses that will be delivered to start service December 1, 2015, will be BYD’s 30′ Electric low floor transit bus that will be used for commuter shuttles, used on COMO Connect, that operate through Columbia’s smaller neighborhood routes, including the downtown orbiter.

“Our decision to go electric extends far beyond cleaner air and doing the right thing,” said Drew Brooks, Multi-Modal Manager of the City of Columbia. “These buses are incredibly quiet, and will drastically reduce noise pollution along the routes. Additionally, they will save Columbia hundreds of thousands of dollars in fuel and maintenance costs and enable us to begin other improvements to our system even sooner.

BYD’s Electric bus employs many advanced technologies developed in-house by a staff of more than 15,000 R&D engineers including the BYD Iron-Phosphate battery, which boasts the only 12-year-battery warranty in the industry. Combined with BYD’s proprietary in-wheel hub motors and regenerative braking system, the BYD battery electric bus offers the lowest life cycle cost of ownership.

The BYD electric bus delivers a host of operational and environmental benefits for public transit riders, bus operators and residents of the community – it is very quiet and ensures a comfortable ride without vibrations, jerks or the noise associated with the conventional buses and combustion engines. The bus can also drive for more than 155 miles even in heavy city traffic on a single charge. As of April 1st, 2015, BYD bus fleets have completed greater than 50 million miles “in revenue service” and have been evaluated by more than 150 cities in 36 countries around the world. To date, BYD has built over 5,000 electric buses globally, making it by far the most popular electric transit vehicle on the planet.