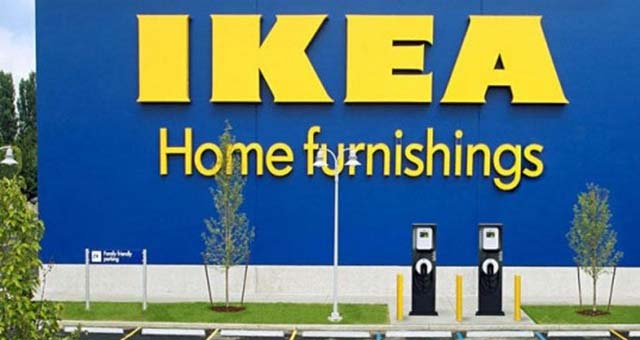 IKEA announced at the Climate Summit of the Americas it is installing charging stations for electric vehicles at all of its stores in Canada.

The Swedish home furnishings giant is partnering with Sun Country Highway to install two 60-amp charging stations at each of its 12 locations across the country. Every location will get two chargers per store to start with. IKEA already offers the service in 18 other countries.

IKEA says it is an ideal retailer for the initiative because its stores tend to be located next to major highways, so they can help fight “range anxiety” among electric car drivers worried about running out of juice on a long trip.

The decision is part of IKEA’s overall move toward sustainability. Last year, IKEA achieved 100 percent renewable energy use in all of its stores through investments in things like a 46 megawatt wind farm in Alberta, almost 4,000 solar panels on the roofs of three Ontario stores, and a geothermal installation in Manitoba that is the province’s largest.

There are more than 2,500 public charging stations in Canada, including at least 600 in Quebec.

Hydro-Quebec‘s Electric Circuit is the largest with 421 stations across the province, including 174 at 28 businesses.