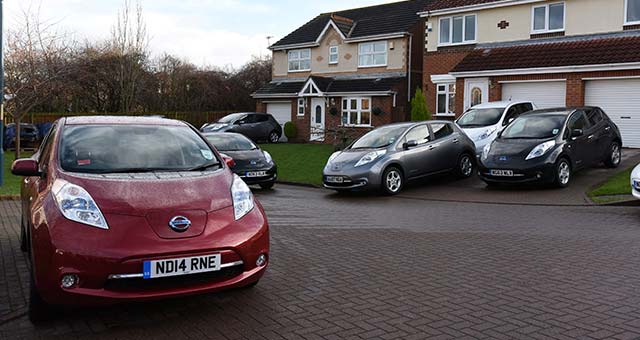 My Electric Avenue, a project examining if local electricity networks can cope with charging a cluster of electric vehicles at peak times, has provided a taste of some of its data at today’s Low Carbon Vehicle Partnership Conference in London.

The project is now entering its reporting phase and it already has some interesting facts and figures, including that the trial participants have driven their Nissan LEAF EVs more than 2.7 million km in less than 18 months – almost the equivalent of driving to the moon and back eight times.

My Electric Avenue, an Ofgem Low Carbon Networks Fund project, is testing a new technology, Esprit, which can control the charging of EVs if the local electricity grid becomes overloaded. The project needed groups of neighbours to come together and each lease an all-electric Nissan LEAF for 18 months, with an original target based on ten neighbours in a cluster, and ten clusters around Britain.

Over the next six months My Electric Avenue will be disseminating its findings so that energy companies, car manufacturers and others can learn from the project. In the meantime, some preliminary data includes:

2.7 million: The distance in kilometres that technical and social trial participants have driven their EVs – almost the equivalent of driving to the moon and back eight times (of course this distance has been achieved with zero tailpipe emissions).

94,000: The number of hours that the social trial participants have charged their EVs for.

20,000: The number of hours of technical trial participants’ EV charging data recorded by the Esprit technology.

17,000: The number of times that the Esprit technology has curtailed charging.

5.2%: The percentage of total recorded charging time for which curtailment has operated.

These figures follow hot on the heels of the Office for National Statistics (ONS) issuing data on attitudes towards electric vehicle ownership. The main findings show that 5% of respondents said that they were thinking about buying an electric car or van.

As well as such forecasts about future electric car ownership, actual sales of cars with ‘plug-in’ capability are currently continuing to rise. Therefore it is extremely timely for the My Electric Avenue project to focus on how best to manage the local electricity network when a large number of electric vehicles charge in the same street at the same time.

It is also the first trial that directly controls domestic EV charging to prevent underground cables, overhead lines and substations being overloaded. The project aims to prove a solution that would avoid the need to dig up the roads to install higher capacity electric cables.