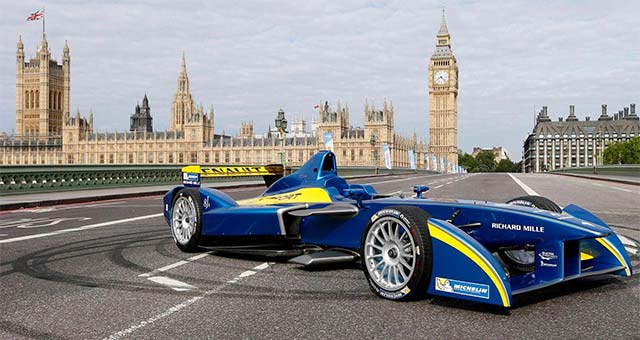 The first ever season of the FIA Formula E Championship reaches its conclusion this weekend in London. In the heart of Battersea Park, the double-header will see six drivers fight to become the first Champion of the category. Among the contenders, the two members of the e.dams-Renault team will be going all out not only to win the drivers’ championship but also to secure the Teams’ title for the French outfit.

After two years of work and intense racing, the outcome of the very first FIA Formula E Championship is about to be decided. Throughout the last twelve months, the 40 Spark-Renault SRT01_E – the architecture of which is supervised by Renaultsport – have demonstrated their qualities.

Reflecting the fairness with which all the competitors have been treated, no fewer than six drivers are still in with a chance of winning the title in London. Nelson Piquet (Nextev TCR) holds the advantage, but both e.dams-Renault drivers will be making a final push for glory in the UK capital.

Currently third and fourth in the championship standings, Sébastien Buemi and Nicolas Prost can also secure the title for Renaultsport’s team partner in race one.

The racing may be all the more intense for the fact that the final round is being held in the capital city widely regarded as the model pupil in Europe in terms of the deployment of public charging points. All the drivers will therefore be looking to shine ahead of the summer break, which will be dominated by preparations for the entry of rival manufacturers next season.

Designed by the architect Simon Gibbons, the track will use the existing tarmac roads in the heart of Battersea Park. It covers 2,922 metres and will be driven in anti-clockwise direction. The competitors will start just a stone’s throw from the Thames before lapping the park and the boating lake, with a technical mix of fast straights, high-speed corners and challenging chicanes and braking points. The races will feature 29 laps on both Saturday and Sunday.

Jun 25, 2015Blagojce Krivevski
My Electric Avenue Participants Drive To The Moon And Back Eight Times In Their Nissan LEAFsPart-Time Scientists Team Going to the Moon with Audi Lunar Rover