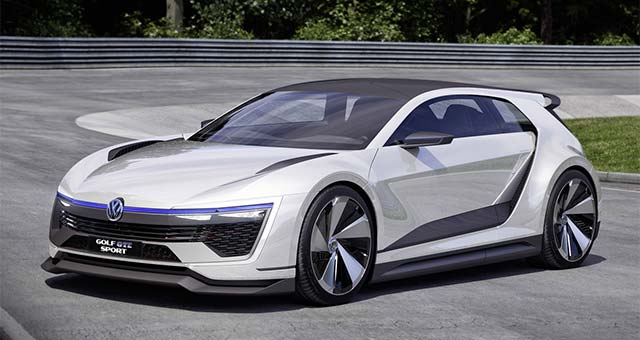 Ringing in a new era: with the Golf GTE Sport presented as a world premiere at the legendary GTI event at Lake Wörthersee on 14 May 2015, Volkswagen is catapulting the GT tradition into the future.

The high-tech Golf GTE Sport that is largely made of carbon is powered by a total of three motors – combined in a plug-in hybrid drive with system power of 295 kW / 396 HP.

The 1.6 liter TSI adapted from the superb Polo R WRC (World Rally Car) is accommodated in the engine compartment at the front of the car. It delivers 220 kW / 295 HP and maximum torque of 400 Nm. Volkswagen has already won the World Rally Championship twice with this engine. In the Golf GTE Sport the four-cylinder masterpiece is assisted by two electric motors. The engineers positioned the first electric motor at the front (in the housing of the 6-speed dual-clutch gearbox). It develops 85 kW and maximum torque of 330 Nm. The second electric motor is located at the rear with the same power output but torque of 270 Nm. The total torque of the drive system is 670 Nm.

Whenever possible, the Golf GTE Sport concept is powered solely by electricity without producing any emissions. In sporty “GTE mode” all three motors work together, giving the all-wheel-drive Golf GTE Sport a standstill to 100 km/h (0-62 mph) time of 4.3 seconds and a top speed of 280 km/h (174 mph). In the NEDC cycle for plug-in hybrid vehicles the sports car consumes just 2.0 l/100 km/h (117.6 mpg US or 141 mpg imp.).

The concept of the Golf GTE Sport has been designed so that the car is at home in both normal road traffic and racetrack conditions. Accordingly, the drive, suspension, body and interior all follow the principle of a pure-bred sports car. The drive system offers maximum agility, the suspension displays maximum neutrality in interaction with the all-wheel drive, the carbon body is lightweight and with its balanced aerodynamics it virtually adheres to the road. The driver ergonomics bridge the gap to motor racing, and with optimum weight distribution and a low centre of gravity the overall package ensures that a lap around racetracks such as the north loop of the Nürburgring is a unique driving experience.

The driver and passenger board the two-seater interior of the Golf GTE Sport through doors that swing right up in the style of the XL 1. The doors extend a long way up into the roof and down into the side sills, resulting in convenient boarding when they are opened upwards. The interior in carbon and microfibre consists of two completely separate areas for the driver and passenger. Like in motorsport vehicles, they sit quite a long way to the back on racing bucket seats with five-point belts. Accordingly, the steering column that is entirely clad in carbon projects a long way into the interior where it appears to float – a further characteristic feature of a rally car or touring-car racer. The functional elements are operated via controllers and buttons in the cocoon-like interior trim. The gearbox of the Golf GTE Sport can also be operated manually with shift paddles on the motorsport steering wheel.

With 162.5 inches long, 73.6 in wide and 48.6 inches and overall height, the Golf GTE Sport,is about 5 inches shorter and nearly 9 inches than today’s Golf but about 3 inches wider.

There are three modes, selectable via an overhead switch: an E-Mode (all-electric), a Hybrid Mode, and GTE-Mode (performance-oriented).

E-Mode. In normal operation the Golf GTE Sport drives just as quietly as the production Golf GTE that is already marketed. In “E-Mode” it is setting off purely electrically. In this case the concept car uses the battery that can be charged externally (but also whilst driving) to cruise without producing any emissions. It can cover up to 50 kilometers (31 miles) on a battery charge. When a defined minimum battery charge is reached, the 1.6 TSI is automatically switched on and the Golf GTE Sport drives in “Hybrid” mode. As soon as the battery reaches a certain charge level again, “E-Mode” can be reactivated at any time via a switch in the overhead console. In “E-Mode”, the rear axle electric motor is first and foremost responsible for propulsion. When high demands are made on performance, the front electric motor is also activated to provide support.

Hybrid mode. As soon as the drive system or the driver deactivates “E-Mode”, the Golf GTE Sport becomes a classic full hybrid with regenerative braking charging the battery and automatic utilization of the right combination of TSI and/or electric motors according to the specific drive situation. When the driver releases the accelerator pedal, and the battery is sufficiently charged, all drive sources are shut off. This is referred to as “coasting”. If the driver releases the accelerator pedal or brakes, and the battery is insufficiently charged, the two electric motors operate as generators and charge the lithium-ion battery with the energy recovered from braking. With the dual mode “Battery Hold” or “Battery Charge” the battery’s energy content can be deliberately kept constant by the driver (“Hold”) or increased (“Charge”). When the 1.6 TSI engine is the sole source of propulsion, the concept car is a pure front-wheel drive car.

GTE-Mode. The switch on board the Golf GTE Sport that is most important for dynamic performance is located in the overhead console. It bears the letters “GTE”. When the driver operates this switch, the character of the Golf GTE Sport’s drivetrain changes drastically in an instant because now the full system power of 396 HP is available. The turbocharged engine alone delivers immense propulsive power, and at this high level the electric drive components of the Golf GTE Sport assume an additional boost function. The boost effect is so strong that the drive unit would also perform well if used in professional touring car races: the Golf GTE Sport sprints to 50 km/h (31 mph) in 1.8 seconds, reaches 100 km/h (62 mph) in 4.3 seconds, and the maximum speed permitted in Austria, i.e. 130 km/h (81 mph), in 6.5 seconds. On German motorways, the concept car reaches 200 km/h (124 mph) in 15.9 seconds. In “GTE-Mode” all four wheels of the Golf are driven.

All-wheel drive – “electric propshaft”. In “GTE-Mode” and as soon as the situation necessitates it, the drive power of the Golf GTE Sport is distributed to both axles. In this case (and if battery charge is low), the front electric motor – which is now being supplied with kinetic energy via the TSI – acts solely as a generator and a source of electricity for its counterpart at the rear axle. Since the energy for driving the rear axle flows by wire and not mechanically here, this is referred to as an “electric propshaft”. Because the TSI drives the rear electric motor via the front electric motor, the all-wheel drive system also operates when the battery’s charge state is low – an invaluable advantage in terms of driving dynamics. The importance of the implementation of the “electric propshaft” for Volkswagen with regard to series production is demonstrated by the fact that the company has had the German equivalent of this designation protected under copyright law.[wzslider height=”400″ lightbox=”true”]