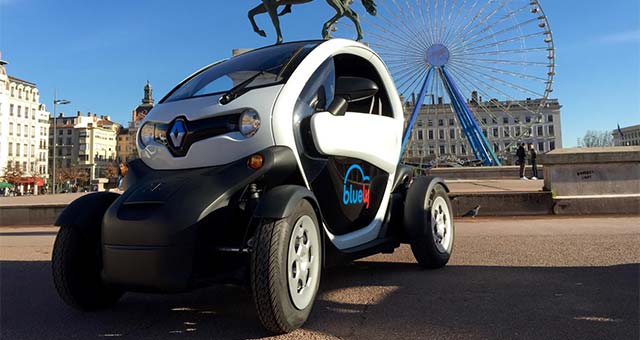 Renault Twizy is now available to users of the Bluely car-sharing service in Lyon, France.

Inclusion of Renault Twizy in the Bolloré group’s car-sharing network, alongside Bolloré’s Bluecar, extends the scope of the service offered to customers.

Subscribers to the Bluely car-sharing service can now drive one of the 30 Renault Twizys available in the Lyon region network. By the end of 2015, there’ll be 110 Twizys in the Bluely (Lyon) and Bluecub (Bordeaux) networks, along with Bolloré’s Bluecars.

Inclusion of Renault electric cars in the Bolloré car-sharing fleets is the first concrete outcome of the partnership signed by the two French groups in September 2014.  A joint venture was formed under the partnership with the purpose of developing full electric vehicle car-sharing solutions.

The Twizy Bluely fleet will be serviced in the expert hands of the Renault Retail Group’s Lyon South dealer network.

Renault Twizy underwent two main adaptations for compatibility with the Bluely charging terminals. First, it carries a device developed by Bolloré for connecting to the subscription and call-centre system of the Lyon region car-sharing service.

Second, the usual Twizy charging cable is replaced by a female connector, taking the cable from the Bluely charging terminal – the same as for the Bluecar. The Twizy Bluely’s charging time is up to three and a half hours for a full charge.

– Industrial cooperation agreement on assembly of Bolloré’s electric vehicles at the Renault Dieppe plant in northern France from the second half of 2015
– Joint venture formed to sell comprehensive electric vehicle car-sharing solutions in France and other European countries
– Renault to conduct a feasibility study on behalf of Bolloré on the design, development and manufacture by Renault of an urban electric vehicle fitted with a 20 kWh lithium metal polymer (LMP) battery

– 3 years: Twizy was launched in 2012
– 15,000 Twizys sold worldwide
– Twizy is now available in 40 countries, the latest in the list being Slovenia and Canada
– Twizy is also available as a commercial vehicle – Twizy Cargo.  A lockable 180-ltre boot replaces the rear seat.