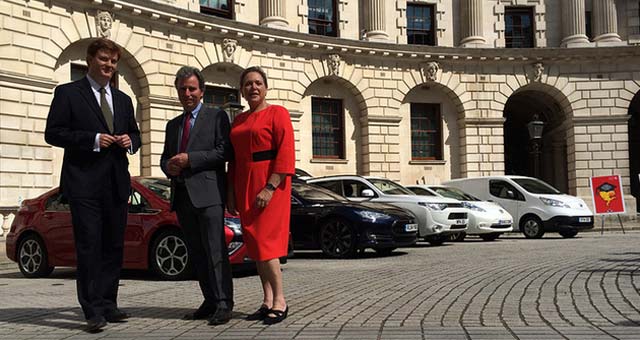 Bidding to be the UK’s first ‘Go Ultra Low Cities’, the shortlisted authorities have until 31 August 2015 to finalise their submissions, with the winning cities announced in the autumn.

Set up by The Office for Low Emission Vehicles and the Department for Transport, the £35 million Go Ultra Low City Scheme will deliver a step-change in the uptake of ultra-low emission vehicles. The programme will reward cities that demonstrate most potential to achieve ‘exemplar status’ – becoming internationally outstanding examples for the adoption of ULEVs in a local area.

The funding has been announced alongside an additional £30 million to enable local authorities and bus operators to replace existing vehicles with greener, cutting-edge alternatives to help clean up urban air quality.

The investment forms the latest part of a £500 million package set aside for ULEVs that was announced last year.

The 12 cities and authorities shortlisted for the £35 million Go Ultra Low city scheme are:

These shortlisted cities will now be invited to fully develop their proposals over summer and the winners – expected to be 2 to 4 cities – will be announced in the autumn.

The scheme rewards cities that show how their plans could be rolled out across the UK, and how their initiatives complement other schemes in their city, such as wider transport policies like the Low Emission Bus and Taxi Schemes. Those cities that address local air quality issues, particularly in relation to NO2and other particulate matter, will also be considered favourably.

The Go Ultra Low campaign is the first of its kind, bringing together the Department for Transport (DfT), the Office for Low Emission Vehicles (OLEV), the Society of Motor Manufacturers and Traders (SMMT) and a consortium of seven car manufacturers – Audi, BMW, Mitsubishi, Nissan, Renault, Toyota and Volkswagen.

Mar 12, 2015Blagojce Krivevski
The ED Torq Is A Windowless Electric Race CarCarlos Ghosn Not Worried About Competition From Apple EV