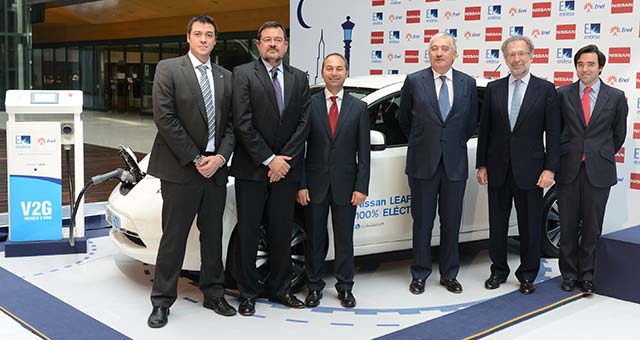 Nissan and Endesa have outlined their agreement to commericalise the revolutionary Vehicle to Grid (V2G) electricity management system which allows Nissan LEAF and e-NV200 owners to sell energy from their vehicle’s batteries back to the grid.

The system is set to dramatically improve the flexibility of the electricity grid and increase utilisation of renewable energy.

The system allows for much smarter management of energy with a bidirectional charger that can charge and discharge the Nissan battery on demand. The Nissan EV battery is fitted to the best-selling electric car in Europe and globally, the Nissan LEAF and the e-NV200 light commercial vehicle, which is built in Barcelona. The V2G unit can be fed from the normal electricity supply and from solar panels or wind turbines on the owner’s property if local regulations allow this.

Thanks to this system, a driver of a 100% electric model such as the Nissan LEAF or e-NV200 will be able to connect to recharge their vehicle during periods of low demand at cheaper electricity rates and then sell back to the grid during peak periods at a higher price when additional capacity is expensive for the producer.

The two companies will work together to make what is now technologically possible, a commercial reality. “Nissan will cooperate with Endesa to increase even further the appeal of 100 percent electric vehicles in Spain and beyond by adding even more benefits to ownership. The ability to sell energy to the grid will mean our EV customers will make money in addition to the savings they already enjoy on fuel. This technology means that as well as cleaner air for everyone, EVs can help make electricity supply smarter and more sustainable.” remarked Marco Toro, Managing Director of Nissan Iberia.

Electric vehicles have between 10 and 100 kWh of stored electrical capacity and often spend much of their time parked, V2G systems can have a central role in the transformation of energy systems. “Thanks to this technology electric vehicles will become part of the electrical system, introducing new storage capacity and demonstrating that the energy stored in an electric vehicle can be used for other purposes in addition to mobility,” said José Bogas, Director CEO of Endesa.

Electricity has traditionally been impossible to store on a large scale, which means that energy produced can sometimes be lost if there is no demand at that time. Energy from wind farms, particularly at night, is not necessarily needed by the grid at that time. With the adoption of the V2G system, Nissan and Endesa will encourage the use of this energy during the night for charging to better balance the grid and increase the adoption of renewable energy.

Energy management is one of the most important parts of the development of smart cities across the world with better optimisation of production, distribution and use between producers and consumers.

The agreement, which was signed during the last Geneva Motor Show, includes other areas of joint action:

– Study of the possible reuse of batteries for electric vehicles (second life) so that at the end of the vehicle’s life, the battery can continue to be used in less intensive uses for example, energy storage before it is recycled years later

– Design and evaluation of innovative energy package deals and electric mobility for both the residential segment (B2C) and businesses (B2B).