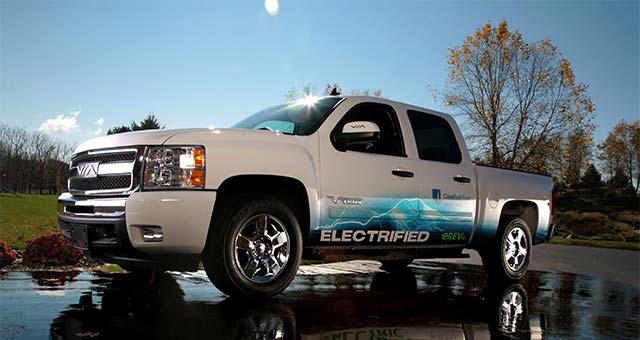 “It’s been about five years to get to this point. Now we need to get those Chevy dealers going so they can deliver trucks to waiting customers,” Bob Lutz said at the 2015 Automotive News World Congress in Detroit.

VIA Motors just delivered the first 40 eREV work trucks to fleet customers to fleet customers. Another 200 units of retrofitted Chevrolet Express vans are in transit. In the first quarter VIA will add Chevy Silverado pickups hybrids to the production line at its Mexico plant near General Motors’ Silao assembly plant. It has signed up about 50 U.S. Chevrolet dealers. VIA says its facility will be capable of producing up to 10,000 vehicles per year.

VIA Motors developed a V-DRIVE powertrain that delivers up to 40-mile battery range and unlimited extended range, averaging over 100 miles-per-gallon in typical daily driving.

“VIA has invested five years in the development of our proprietary electric drive technology and the establishment of a solid fleet market base,” says VIA CEO Pablo Acedo. “We are proud to now begin commercial production and plan for a rapid ramp-up to initially fill the present and growing demand by fleet customers.”

The first customers are all fleets including Federal Express, Verizon and several utility companies.