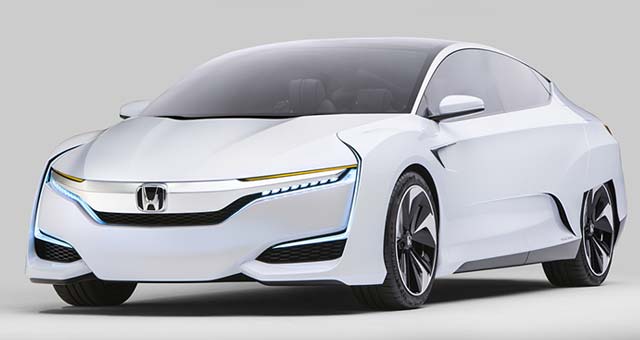 The Honda FCV Concept showcases the styling evolution of Honda’s next fuel-cell vehicle, anticipated to launch in the U.S. following its March 2016 introduction in Japan.

The new Honda fuel-cell car will feature a spacious cabin with seating for five-passengers, a driving range estimated to be in excess of 300 miles, and an anticipated refueling time of approximately 3 minutes at a pressure of 70 MPa. Its fuel cell stack, which fits entirely within under the hood, is 33 percent smaller with a 60 percent increase in power density compared to the outgoing Honda FCX Clarity.

As the next progression in Honda’s dynamic FCV styling, the Honda FCV Concept features a low, wide aerodynamic body with clean character lines. The interior strives to achieve harmony between man and machine by taking advantage of new powertrain packaging efficiencies delivering even greater passenger space than its predecessor, the 4-passenger Honda FCX Clarity fuel-cell vehicle.

The Honda FCV Concept made its world debut in Japan on Nov. 17, 2014, followed by an announcement at the Los Angeles Auto Show that Honda will provide FirstElement Fuel with $13.8 million in financial assistance to build additional hydrogen refueling stations throughout the state of California in an effort to support the wider introduction of fuel-cell vehicles.

Honda also announced plans for future products and technology, including an all-new battery electric vehicle and an all-new plug-in hybrid vehicle by 2018.

The automaker also said it will use its two- and three-motor hybrid systems in more vehicles.

Honda’s alternative-fuel vehicle lineup includes the Fit EV, Civic Hybrid, Civic Natural Gas, Inside Hybrid, the CR-Z sport hybrid coupe, the Accord Hybrid and the Accord Plug-in Hybrid. The Japanese carmaker also showed off the upcoming Acura NSX in Detroit this week.

Before the end of the year, Honda will begin to introduce the new 4-cylinder VTEC Turbo engines – an extension of its Earth Dreams Technology powertrain lineup – that will deliver fun-to-drive performance while supporting fuel efficiency at a very high level.