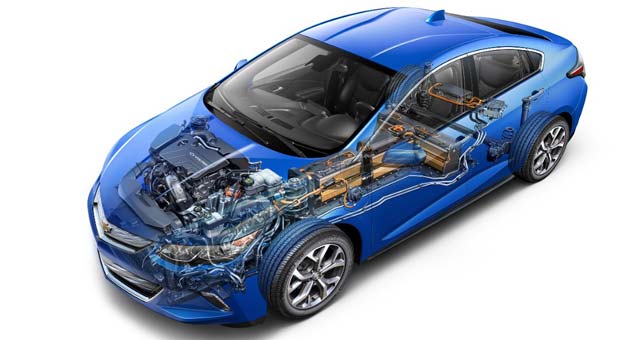 Owners of the 2016 Chevrolet Volt should be able to drive more than 1,000 miles on average between gasoline fill-ups with a total estimated driving range exceeding 400 miles, 50 of those in all-electric mode.

“The improvements in the efficiency and performance of the 2016 Volt are driven by what owners said they wanted in the next-generation model: more range, better fuel economy and stronger acceleration,” said Andrew Farah, vehicle chief engineer. “Building on General Motors’’ industry leading battery and drive-unit technologies, we’ve delivered all of that, while also making the Volt more refined and fun to drive.”

Practically every element and component of the Voltec system, which includes the battery, drive unit, range-extending engine and power electronics, is new or improved. The Volt’s greater EV range and all new range-extender, result in a quieter driving experience.

“Volt remains the only electrically driven vehicle with range capability similar to traditional engine- or hybrid-driven cars of its size,” said Farah. “In all climates, it can be driven across town strictly on electricity or across the country with the assist of its range extender – a claim that can be made of no other electric vehicle without condition.”

Increased battery capacity
General Motors’ industry-leading battery technology includes revised cell chemistry, developed in conjunction with LG Chem. Storage capacity is 20 percent higher on a volume basis when compared to the original cell, while the number of cells decreases from 288 to 192.

In short, the new Volt’s battery pack stores more energy – 18.4 kWh vs. the previous 17.1 kWh – with fewer cells, because there is more energy capacity per cell. It also has a more powerful discharge rate of 120 kW vs the previous 110 kW, which contributes to greater performance.

The battery pack retains the familiar T-shape of the first-generation Volt, but with revised dimensions. The new cells are layered in pairs in each cell group rather than the previous three-layer configuration. They are also positioned lower in the pack for improved (lower) center of gravity in the vehicle, and the overall mass of the pack decreases by more than 20.

Based on a GM study of more than 300 model year 2011 and 2012 Volts in service in California for more than 30 months, many owners are exceeding the EPA-rated label of 35 miles of EV range per full charge, with about 15 percent surpassing 40 miles of range. Current generation Volt owners have accumulated more than 600 million EV miles.

Two-motor drive unit
A new, two-motor drive unit is at the heart of the 2016 Volt’s greater performance efficiency and expanded all-electric driving range. The motors are smaller and lighter than the previous motor-generator drive unit, while delivering more torque and power capability.

The new drive unit was also designed with improved noise and vibration characteristics that contribute to a quieter driving experience. Total motor mass reduction is more than 33 pounds (15 kg).

The motors can be used individually or in tandem, effectively delivering two torque paths to make the most of performance and efficiency. The new Volt can operate on a primary motor at lower speeds such as city driving, split power between the motors at moderate speeds or fully engage both motors for higher-load/higher-speed driving, such as passing on the highway. The Traction Power Inverter Module (TPIM), which manages power flow between the battery and the electric drive motors, has been built into the drive unit to reduce mass, and size, which contributes to greater efficiency.

“The blended arrangement of the two motors is a key contributor to the new Volt’s GM estimated 50-mile all-electric driving range,” said Larry Nitz, executive director of transmissions and electrification powertrain engineering. “The arrangement also enhances torque, giving the Volt a stronger feeling of acceleration and the ability to use both motors helps deliver nearly 20 percent improvement in low-speed electric acceleration.”

As with the first-generation model, the 2016 Volt offers four diving modes:

– Normal: Designed to make the most of battery range and efficiency during every day commuting.

– Sport: Provides revised accelerator pedal mapping for improved acceleration feel when passing or taking off from a stop.

– Hold: Allows owners to use their battery power when they want to use it.  Hold mode switches the Volt into extended-range operation, which is ideal for longer-distance highway driving.

The new drive unit will be manufactured at GM’s Powertrain plant in Warren, Mich.

New 1.5L range extender
A range-extending engine is the key feature that makes Volt a no-compromises electric vehicle, providing owners the assurance they can go anywhere, anytime without having to worry about whether they have enough battery power to go through mountains or range for a spontaneous weekend getaway.

The new range extender also runs on less-expensive regular unleaded fuel and delivers a GM-estimated combined fuel economy rating of 41 mpg. The 1.5L engine will be manufactured at GM’s Toluca, Mexico engine plant for the first year of production, then shift to the Flint, Mich. engine plant.