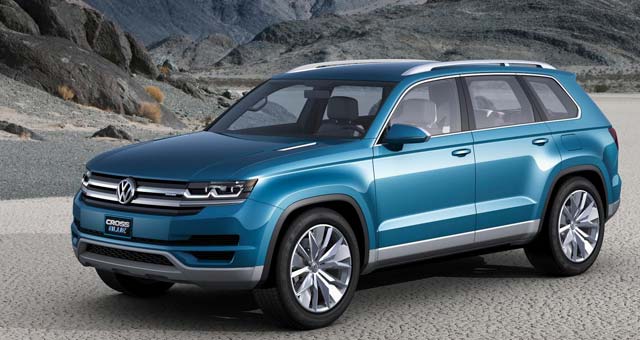 Volkswagen has unveiled the CrossBlue SUV concept at the 2013 Detroit Auto Show.

The CrossBlue has been developed specifically for the U.S. and Canada, and if it goes into production would sit above the Tiguan and below the Touareg in the Volkswagen SUV line-up.

The CrossBlue features a plug-in hybrid powertrain that combines a TDI engine with two electric motors, a DSG transmission, and an electric all-wheel-drive system dubbed ‘propshaft by wire’, and offers economy of 2.1 liters per 100 kilometers or 89 MPGe combined in electric mode and 35 mpg as a hybrid.

The CrossBlue has two ‘fuel doors’: one for the diesel tank on the passenger side, and one covering two electrical sockets on the driver’s side. The first socket is to charge the lithium-ion battery and the second can be used to connect electrical devices.

Behind the third seating row is a cargo area of 335 liters (length 600 mm).  With the third row folded, cargo capacity grows to 815 liters and load length to 1,387 mm, figures that increase to nearly 2,000 liters and 2,230 mm with the middle row stowed.  A forward-folding front passenger seat makes for a maximum 3,110 mm load length.

As soon as the driver starts the CrossBlue, controls for the lights, climate control and four-wheel-drive system emerge from their flush resting positions.  The controls have aluminum surrounds: aluminum is one of the predominant interior materials, along with leather and dark-stained banana tree wood accents.  In the centre console is a 10.2-inch touchscreen, while there is an Apple iPad Mini in the back of each front head-restraint.

The CrossBlue runs in zero emissions mode at the press of a button or automatically. With a fully charged battery, the CrossBlue can travel up to 14 miles in electric mode in the US test cycle, or 33 km (20 miles) using the European driving cycle. It has a potential range of 661 miles from a combination of the 70-litre fuel tank and battery power.

The CrossBlue is based on Volkswagen’s new Modular Transverse Matrix (MQB) components set. Its 190 PS TDI diesel engine is from the new EA288 family, matched to a six-speed DSG dual-clutch automatic transmission.  The 9.8 kWh lithium-ion battery lies in the vehicle’s centre tunnel, and powers 40 kW front and 85 kW rear electric motors. The Cross Coupe concept first shown in 2011, and also on display in Detroit, uses a similar powertrain concept, showing the possibilities of the MQB platform.

Powered by its battery, the CrossBlue can cover up to 33 km/20 miles (NEDC) or 14 miles (US test cycle) as an EV.  In E-mode, only the rear electric motor propels the vehicle and the TDI engine is shut off and decoupled.  At up to 75 mph, the engine is not engaged as long as the battery has sufficient charge.  As soon as there is a need for TDI power, it is coupled to the drivetrain again, within fractions of a second.  The battery can be charged by external power sources or by the engine while the vehicle is moving.

The driver can switch to a charging mode by pressing another button on the centre console.  The TDI engine charges the battery while driving to store enough electrical energy for EV operation later in the journey, for instance in an urban area.  There are also a number of other modes:

– Coasting: When the driver releases the accelerator pedal, the engine and electric motors are decoupled from the drivetrain, provided there is sufficient battery charge.
– Battery regeneration: When the accelerator is released or the brakes applied, the electric motors act as generators and feed energy recovered from the brakes into the battery.  In this case, the TDI is also shut off and decoupled from the drivetrain.
– Boosting: When more performance is required, the electric motors form an alliance with the TDI engine known as ‘boosting’.  In this mode, all four wheels are driven.
– Off-road(‘propshaft by wire’): All four wheels are driven.  In this case the front electric motor (supplied with energy by the TDI engine) operates as a generator and a power source for the electric motor at the rear.
– TDI only: In this mode, the CrossBlue is a pure front-wheel-drive vehicle.[wzslider height=”400″ lightbox=”true”]