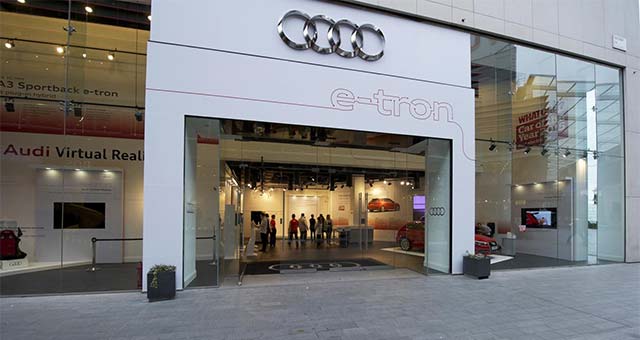 Audi has opened its first ever ‘pop-up’ store at London’s Westfield Shopping Centre in Stratford. The store will showcase the A3 Sportback e-tron to shoppers in readiness for the national roll out at Audi Centres across the UK from 17 January 2015.

Utilising the latest 2D and 3D augmented reality as well as virtual reality, the full range of innovative technology that the versatile A3 Sportback e-tron has to offer is depicted through a suite of immersive digital platforms. The A3 Sportback e-tron will also be in situ ‘in the metal’.

Customers can go on a virtual test drive of the very first Audi production plug-in hybrid electric car using Oculus Rift headsets, learn about the benefits of the four different drive modes available (including an electric-only mode and a hybrid charging mode) on the A3 Sportback e-tron, as well as personally configure their own bespoke model using the Audi Explorer App and Audi Mileage Tracker App. Additionally, the Audi connect app will enable owners of the car to control a variety of functions, such as the charging system via their smartphones.

The ground-breaking store compliments the cutting-edge performance of the A3 Sportback e-tron, which promotes mobility without compromise and is the first electric car of any kind to be derived from a UK best-selling premium hatchback. It couples a 75kW electric motor with a 150 PS 1.4 TFSI petrol engine, delivering the potential for up to 176mpg with CO2 emissions of just 37g/km.  During a recent test drive in Vienna, the car drove 41 miles of a 55-mile city trip with zero emissions.

Drivers who have already made the transition to an electric car and who park it at Westfield Stratford while they visit the pop-up store will be able to take advantage of six free charging bays courtesy of Audi from 12 January to 8 February.