Qualcomm Wireless Charging – How Does It Work? 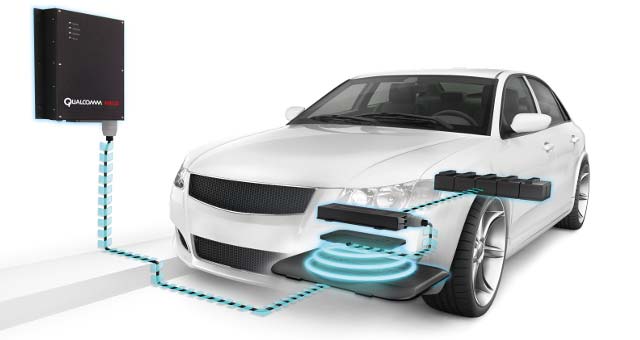 As Formula E takes its first steps in its inaugural season, the championship and its partners are already looking to the future with the introduction of wireless charging technology.

Qualcomm Incorporated is the world leader in 3G, 4G and next-generation wireless technologies and joined the electric racing revolution at the very start of the journey as a founding technology partner. In Formula E, Qualcomm has incorporated wireless charging to be used on the course cars. But how does it work?

Graeme Davison, Vice President of Technology at Qualcomm, explains the physics behind the process. “I could spend 10-15 minutes explaining and quite possibly 10-15 hours! The system itself is actually quite old technology. It’s from early days of magnetics, motors and transformers. It all boils down to stuff that was done 150 years ago in very basic format. The theory goes that if you create an alternating electric field, alternating a current through a wire and then put that through a coil, you then create a magnetic field.

The BMW course cars, both the i3 and the i8 – including the Qualcomm Safety Car, park at the end of the pitlane at race events ready to take to the track. Qualcomm set up charging stations in FIA-controlled areas, which includes a power supply, a base pad and a vehicle pad.

As Davison suggests, the difficulty is harnessing enough energy in an efficient way. “The key is to maximise efficiency and maximise energy, so we’ve got systems that transfers up to 20kW of energy across a gap of 150 to 200mm,” he says. “Where we come along, is take very simplistic physics and we make it much more efficient, comply with safety standards and put the power into it. The clever bit is how we make the magnetic flux move across the air gap and that incorporates a lot of magnetic design to effectively direct those magnetic fields such that you can capture them with the coil that is on the car.”

Qualcomm joined forces with Formula E from the very early stages of the project following its work with Lord Paul Drayson, the original owner of the Drayson Racing entry, which was taken over by Trulli ahead of pre-season testing. The two combined with the aim of setting the world land speed record for an electric vehicle. That partnership led to a meeting with Formula E CEO Alejandro Agag.

“We worked with Paul on that three years ago and he eventually was one of the interested parties for Formula E and at one point was a team principal,” adds Davison. “He introduced us to Alejandro back in the very early days and said just imagine what wireless charging can do to a motor racing series. Alejandro understood the vision for wireless charging and despite Qualcomm pioneering so many technologies it was wireless charging that specifically brought the two companies together.”

In preparation for the first fully-electric racing series Qualcomm drew upon its expertise to ensure the technology remains at the heart of innovation, while retaining the highest levels of efficiency and safety for use in a bustling motor racing environment.

“It needs to be safe, safety is of course paramount in all forms of motorsport,” says Davison. “Also you need to ensure you don’t affect other electronic devices by radiating energy into existing appliances. We spent a lot of time looking at the core construction of how those vehicles are built – what materials have been used, how the materials have been put together etc. Then also where the current systems reside on that vehicle and we take that information and use that to simulate what would happen if you add a wireless induction system and that simulation allows us to see where the magnetic fields go and predict how that will affect other systems on the vehicle but also how safe it is for someone stood by the vehicle or sat inside.”

Possibly the most exciting aspect of wireless charging is the future potential both inside Formula E and for electric vehicles on the road.

“We see this technology moving into all electric vehicles, for car manufacturers who are producing these cars. About five or six years ago when we first really started looking at the case for wireless charging we went out and spoke to car companies and asked whether they would be interested in using this developed technology on future products,” says Davison.

“We wondered whether they would shy away from it due to perceived complexities but it is a lot simpler than various plugs and other devices. Every car manufacturer at a senior level when we presented this said it was perfect. Ultimately it’s about freedom and parking the vehicle and thinking plugs are all we had. This was something we had to do in our old lifestyle. If we can get the EV to be similar to an internal combustion engine from a user perspective then that would be quite an achievement.”

But what about on track? Is there a chance that we may see wireless charging systems on the race cars as well as the course cars?

“It has always been the vision at Formula E that we get wireless charging put on the race cars. One of the things we could do is charge the vehicles outside which is beneficial from a sponsor’s perspective for exposure. The cars won’t be hidden away when charging.”

Both Formula E and Qualcomm are looking to the possibilities of dynamic charging – managing to harness the electrical energy while the car is driving at race speeds on track. It’s an idea that could revolutionise electric motor racing and could potentially lead to a 24-hour race without the need to stop to recharge. But how close is the technology from making this a reality?

“We may not be able to do charging at 150mph but we could perhaps do charging at slower speed,” Davison admits. “We could implement wireless charging on slower parts of the track. Even in the pitlane, off the racing line or even charging sections where drivers will have to decide whether to drive flat out or slow down to pick up charge. Anything is possible!

“The research on dynamic charging is underway and we don’t see it being that far away. It’s obviously difficult to put a date to it but probably within five years or so you will absolutely see vehicles charging while moving. The question that is difficult to predict is at what speed would they be charging and how much energy will be required!”