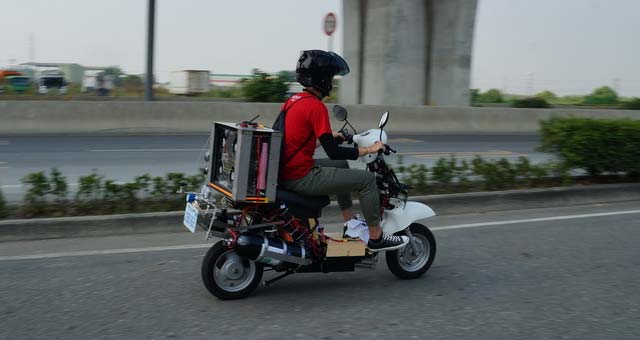 “The test result is promising! The maiden voyage of 80 km is accomplished easily, and the overall range will reach more than 160 km,” said Dr. Wei-Hsiang Lai, professor of aeronautics and astronautics at NCKU.

The “Pegasus One” developed by Dr. Lai’s research team in cooperation with local enterprises made its maiden trial run on December 1. It completed a round-trip drive of over 80 km between Kaohsiung’s Alian District and Tainan’s Hsinhua District.

Dr. Lai said, the “Pegasus One” is upgraded from the original electrical scooter to the current hybrid power combining fuel-cell and lithium battery.

He also said, the overall vehicle structure is revised, especially its power and monitoring system. Fuel-cell is added to enhance its range with multiplying electrical capacity by charging battery from fuel-cell.

The vehicle has added a 3-kW Ballard fuel-cell and two high pressure hydrogen storage cylinders to the vehicle to build a power system that runs by transmitting hydrogen energy to electricity via the fuel cell, according to Dr. Lai.

This concept is similar to the Toyota Mirai fuel-cell sedan, the hydrogen is supplied from two high pressure (up to 300 bar) bottle with 6.8 liter fabricated by carbon fiber reinforced plastics with safety approval, and the bottle of FCV is even as high as 700 bar.

As long as the storage pressure can be raised up to 700 bar, the range of “Pegasus One” can be further extended to 300 km, according to Dr. Lai. 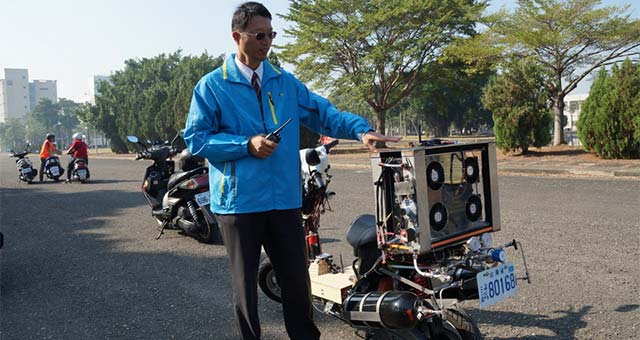