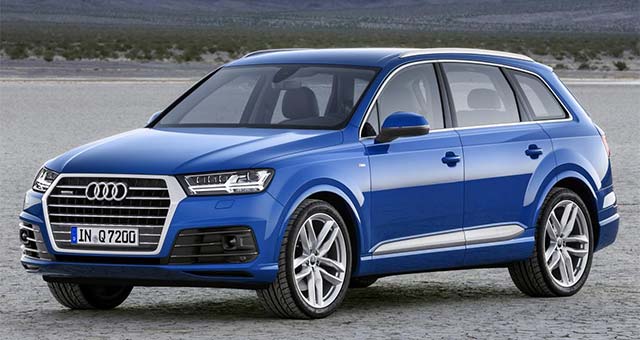 With the new Audi Q7 e-tron quattro, Ingolstadt is setting standards in the premium SUV segment.

With a curb weight of just 1,995 kilograms (4,398.2 lb), the new Audi Q7 is the lightest in its class. It weighs 325 kilograms (716.5 lb) less than the previous model. With its lightweight, multimaterial body and an all-new chassis, it is comfortable while at the same time offering the typical performance of a sporty Audi – and that with top-notch CO2 values.

The Audi Q7 e-tron quattro also sets standards with respect to the operating concept, infotainment, connectivity and driver assistance systems. The second-generation modular infotainment platform is on board, as is the Audi virtual cockpit. The new MMI all‑in‑touch control unit with large touchpad makes operation child’s play. Other attractive innovations include the expanded services from Audi connect, the Audi tablet for the rear seat passengers and the two sound systems with 3D audio. Smartphone integration with Google Android Auto and Apple CarPlay is also new. The new Audi Q7 is one of the first cars worldwide to offer these functions.

Audi presents the new Audi Q7 at the 2015 Detroit Auto Show. With the second generation of the large SUV, the brand with the four rings is setting new standards in its market segment. The drivetrain, chassis, lightweight construction, assistance systems and infotainment impress with innovative technology. The new Audi Q7 is up to 325 kilograms (716.5 lb) lighter than its predecessor and reduces CO2 emissions by as much as 50 grams per kilometer (80.5 g/mi). Scheduled to follow shortly after the market launch, the Audi Q7 e‑tron quattro is the world’s first plug-in hybrid with a six-cylinder diesel engine and quattro all-wheel drive.

Plug-in hybrid with quattro all-wheel drive: the Audi Q7 e-tron quattro
Audi is rapidly expanding its lineup of vehicles with powerful electric drive systems. These are scheduled to be joined by the Audi Q7 e-tron quattro in 2015, when it will be the world’s first plug-in hybrid with a six-cylinder diesel and quattro all-wheel drive. Equipped with quattro all-wheel drive, the SUV consumes just 1.7 liters of fuel per 100 kilometers (138.4 US mpg) – for a CO2 equivalent of less than 50 grams per kilometer (80.5 g/mi). The lithium-ion batteries store 17.3 kWh of energy, enabling a range of up to 56 kilometers (34.8 mi) in pure electric mode.

The Q7 e-tron is the world’s first PHEV with a heat pump, which minimizes the energy requirement for heating and air conditioning without compromising customer comfort. Furthermore, the customer can preheat or precool the car via an app.

The design of the new Q7 is masculine and determined. Horizontal lines extend above the wheels. These blisters are a subtle homage to the classic quattro models from Audi. The exterior mirrors are mounted on the shoulders of the doors; blades run from the front to the rear doors and bear embossed quattro logos. The rear hatch wraps around the massive, steeply raked D-pillars, a typical feature of the Q models from Audi.

The Singleframe grille is deeply sculpted and features thick crossbars. It is integrated organically into the front end. Its broad frame extends to the headlights, which feature either xenon, LED or Matrix LED technology, depending on the option chosen by the customer. The daytime running lights of the LED headlights are shaped like a double arrow. The taillights of the top model include dynamic turn signals – another Audi innovation.

Interior design
The new Audi Q7 welcomes its passengers with an atmosphere of cultivated elegance and spaciousness. The interior design appears tautly stretched; the two‑piece inlays are available in various material combinations. The double application strip in the doors provides for a sense of lightness.

The instrument panel is visually separated from the center console, supporting the sportiness and lightness of the interior.

Color and equipment
With the colors and materials used in the Q7, Audi is showing a new expression of lightness, sportiness and luxury in the premium SUV segment. The instrument panel is separated horizontally into two colors, which enables brighter colors to be used on the bottom. There are seven interior colors from which to choose. The two-piece application strip is available in a variety of material combinations. Besides high-quality effect finishes, there are a number of aluminum and wood variants from which to choose, including Beaufort walnut. Audi offer a choice of fabric, Alcantara, robust Cricket leather and fine Valcona leather for the seat coverings.

The new MMI operating concept
The latest generation of the Audi MMI operating concept makes it easy to control the multitude of convenient and innovative functions in the Audi Q7. The innovative MMI search with intelligent suggestions makes it easier to search for specific song titles and to input telephone contacts or navigation destinations, thus significantly reducing the amount of time spent on these operations. Nearly all entries can be completed in just a few steps. Two supplemental menus contain intelligently linked functions and options.

Displays appear on the central MMI monitor, which rises up from the instrument panel when the system is started and also enables the passenger to use the Audi MMI system in the accustomed manner.

Audi virtual cockpit
The optional MMI navigation plus is also available with the Audi virtual cockpit, a 12.3-inch TFT display that presents tack-sharp, painstakingly rendered graphics. As in the new Audi TT, the Q7 customer can switch between a classic view with high-quality rendered dial instruments and an infotainment view with an extended display area for lists and the map – all conveniently from the steering wheel. Furthermore, custom views, such as certain values from the onboard computer, can also be configured. The great flexibility of the displays enables all information to be brilliantly presented as a function of personal preferences and the driving situation.

New rear seat entertainment: the Audi tablet
Audi is breaking new ground in rear seat entertainment. One or optionally two Audi tablets with 10.1 inch screens and a fine finish serve as rear seat monitors. Their heart is a powerful NVIDIA Tegra 4 processor. The Audi tablet can stand up to the demanding challenges in the car – it is temperature-resistant and offers the necessary crash safety lacking in conventional end-device solutions. The Audi tablet is connected to the MMI navigation plus via WiFi, thus gaining access to the radio, media, navigation and car functions of the Audi Q7.

A rear seat passenger can, for instance, send a navigation destination to the MMI navigation via the Audi tablet. The passenger can also surf the Internet via the WiFi connection. The use of the Android operating system in the Audi tablet and the availability of the Google Play store give the customer access to a huge number of applications, games, movies, music, eBooks and much more. At the end of the trip, the Audi tablet can be removed from its mount and used offline or on any external WiFi network. The Audi tablet features a full HD camera, 32 GB of internal storage and an additional Bluetooth and NFC interface for connecting headphones, for example.

Minus 100 kilograms
Compared with the previous model, the chassis of the new Audi Q7 is over 100 kilograms (220.5 lb) lighter – thanks to many changes. The links of the wheel suspensions, for example, are now made of aluminum and high-strength steel; the cardan shafts of the front axle are hollow; and the pivot bearings are aluminum forgings.

The new all-wheel steering
Audi offers another groundbreaking innovation as an option: all-wheel steering. A steering system with an electric spindle drive turns the rear wheels inward by as much as five degrees depending on the situation. At low speeds they steer opposite the front wheels, which significantly increases vehicle agility and reduces the turning radius by up to one meter (3.3 ft). At higher speeds the rear wheels follow the movement of the front wheels. This further optimizes steering response, and vehicle stability is further enhanced in avoidance situations.

The new Audi Q7 comes standard with 18-inch wheels and 235/65 tires. Audi and quattro GmbH offer a large number of additional wheels in sizes up to 21 inches as options. Large, vented brake discs bring the SUV safely to a stop. They are gripped up front by aluminum six-piston calipers. The electromechanical parking brake, updated with convenient hill hold and startup functions, acts on the rear wheels.[wzslider height=”400″ lightbox=”true”]