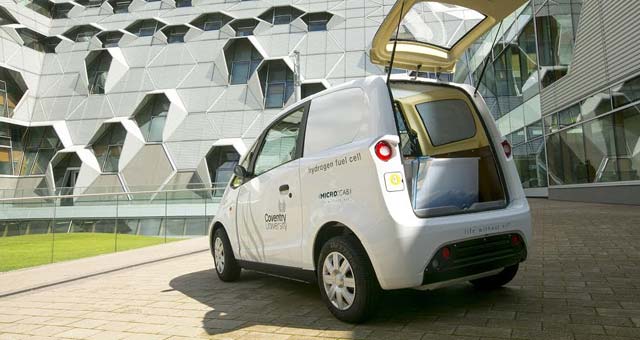 A hydrogen fuel cell van will be showcased by Coventry University and its spin-off firm Microcab at the Advanced Engineering UK show in Birmingham next week, as both organisations exhibit their zero-emission vehicle expertise.

Microcab, which is based at the University’s Technology Park, will take pride of place on one of the show’s main stands where it will exhibit the commercial van adaptation of its state-of-the-art H2EV – a hydrogen fuel cell vehicle whose only exhaust emission is water.

The University will also use the event to showcase its recently-launched Institute for Advanced Manufacturing and Engineering (AME), a £32+ million collaboration between Coventry University and Unipart Manufacturing which recently secured a major R&D role in the development of cleaner and more efficient engines for future Ford models.

Two of the University’s leading experts in engineering and manufacturing will also be speaking at the event, including commercial director Mike Dickison – who is set to offer an insight into the development of low carbon transport technology – and AME director Carl Perrin, who will talk about how the AME model offers a new way for industry and academia to develop the engineers of the future.

Microcab’s pioneering fleet of zero emission H2EVs have a 55mph top speed and 180 mile range on a full tank, and are currently participating in the world’s largest hydrogen fuel cell trial which was launched in northern Europe this summer.

The European Commission-funded SWARM initiative has almost 100 hydrogen-powered cars taking part in a three-year technology development programme in the UK, Belgium and Germany.

The Advanced Engineering UK show 2014 will take place at the NEC in Birmingham from Tuesday 11th – Wednesday 12th November.