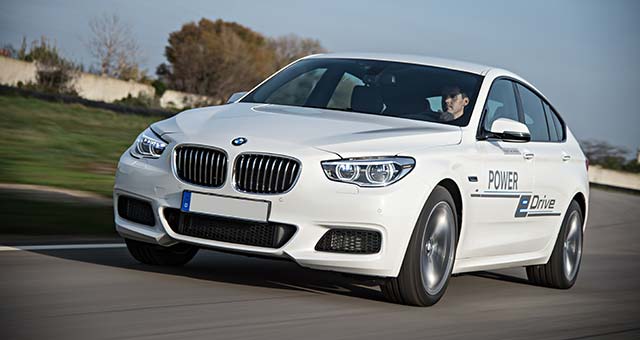 Revealed in a 5-Series GT, the Power eDrive plug-in hybrid system consists of a company’s new 170kW (228 hp) turbocharged 2.0-litre four-cylinder direct injection gasoline engine and two electric motors borrowed from the i3 and beefed up a bit. A 150kW (201 hp) version of the i3‘s synchronous unit mounted up front in the space usually taken up by the torque converter in the car’s eight-speed automatic gearbox. The second, even more powerful 200kW (268 hp) unit sits in the rear axle assembly. Together they make an astonishing 670 horsepower and 750lb ft of torque.

A 20kWh lithium ion battery mounted centrally ensures an all-electric range of 100 km (62 miles) for this prototype, which will weigh substantially more than the heaviest 5-Series GT (2,070kg). The fuel tank has been reduced in size from 70 liters to 30 liters. The prototype comes with a total range of around 600 km (370 miles).

The company plans to offer this new  BMW Power eDrive in a range of vehicles which may include the 7 series, the X5, the X6 and possibly the X7. The Power eDrive unit is even rumored to appear on the forthcoming Rolls-Royce SUV.[wzslider height=”400″ lightbox=”true”]