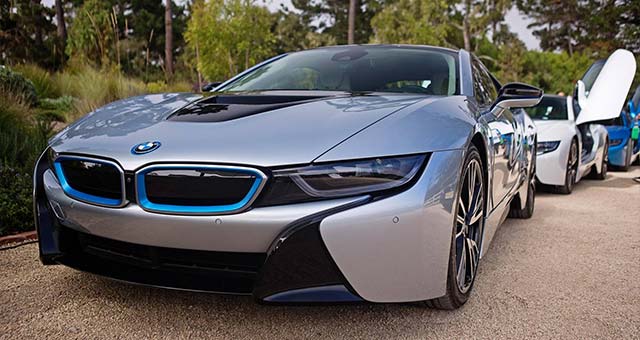 Robert Llewellyn last week spent some time driving the BMW i8 at the UK’s Low Carbon Vehicle event in Millbrook.

Last week at the Low Carbon Vehicle event at Millbrook proving grounds I finally got to have a drive of the BMW i8. I’d seen it before, I’ve seen one ‘in the wild’ on a London street but I hadn’t driven it up until that point.

Yes, the engine sound is entirely manufactured, it’s ‘fake’ if you like, but so what?
This car is designed and built as a supercar which, from where I’m sitting, is an utterly ridiculous notion.

Surely supercars are for people who have so much money they may as well buy one. However, and I’m trying to take the long view here, as with all technology, the first iterations are expensive and for the very wealthy.

But the innovation and technological developments embodied in a car like this (unlike the notion of the offensive ‘trickle down effect’ regarding obscene wealth in the 1%) actually do trickle down to more mundane and sensible forms of transport.

As you can see in the video, being in this very fast car is great fun, there’s no denying that. Of course I’d love one, that’s the whole point of them.

Just to give some weight to the argument in favour of this car, your average supercar will do ten, maybe twelve miles to the gallon. When the cars are stationary in busy city traffic the engines are pumping out comical levels of noxious gas and CO2, when they’re not even moving. Oh, but they sound great.

Yeah, thanks, I’ll live without the noise if my eyes aren’t stinging.

The BMW i8 won’t come cheap with a starting price of $136,650, including the destination charge. As it went from a concept to the current production model, the i8 kept premium features like gullwing doors and a passenger cabin made of lightweight carbon-fiber-reinforced plastic.