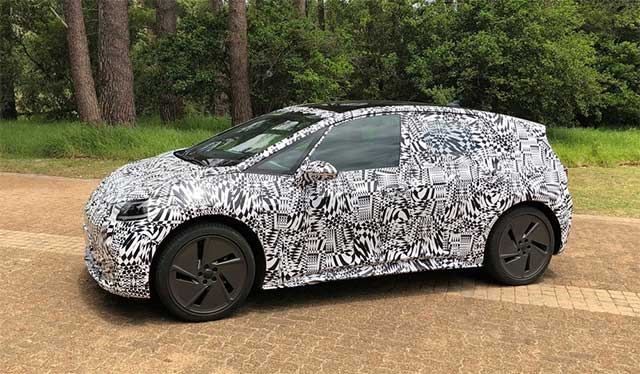 Fully Charged was present at and demonstration of the Volkswagen ID. in South Africa together with the Top Gear magazine and a couple of German journalists.

It’s very unusual for anyone outside a big car manufacturer to get to drive a test vehicle. Volkswagen have cars running in South Africa and Lapland at the moment. Very hot and very cold climates.

The Volkswagen ID. is a modest, Golf sized hatch back which will cost exactly the same as the VW diesel Golf.

The motor (driving the rear wheels) produces around 180 hp, so it’s impressively nippy. This is an electric vehicle with either a 330 or 500 kilometer range (206 or 312 miles) according to the new WLTP measurements, which from experience means around 190 or 295 miles in real world conditions.

Volkswagen’s electric offensive is based on the modular electric drive matrix (MEB), a technology platform developed specifically for electric vehicles.

Production of the Volkswagen ID., the world’s first series vehicle based on the MEB, will begin in Zwickau at the end of 2019. It’s important to point out that this car won’t appear in showrooms until early 2020.