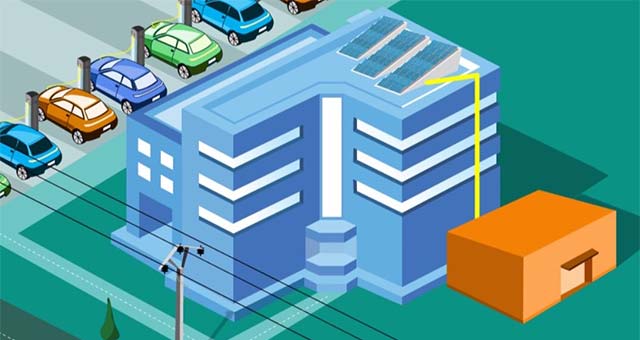 The Eco2charge consortium coordinated by Bouygues Energie & Services has developed an electric car charging system based on old batteries that helps smooth out power demand when dozens of cars simultaneously recharge.

This project draws upon the expertise of partners in different sectors for the development of electric mobility: Actility, Alstom, Bouygues Energie & Services, CEA, Embix, Nexans, Renault and the University of Versailles Saint-Quentin-en-Yvelines.

The standard charging of an electric car consumes about 3.7kW in 4 hours. But imagine a firm or institution where dozens of employees arrive in the morning and all start recharging their cars at the same time. That would put a huge strain on the building’s power network and force it to upgrade its electricity connections.

The full and simultaneous charging of 100 EV’s would require doubling the total power capacity of an office or commercial building (to 670kW instead of 300kW for a building with 600-1,000 occupants), thus entailing a more expensive subscription cost and a high impact on the electrical grid, only for 2-3 hours a day.

The Eco2charge consortium has developed a charging system that assembles old batteries from electric cars into a power storage bank that can soak up electricity at night and gradually charge vehicles during the day.

The project, which has a 13.2 million euro budget, has been trialed in two Bouygues and Renault pilot sites and the group aims to sell it to office buildings, parking lots, campuses and other sites where fleets of electric cars can park.

For storage, Eco2charge will use end-of-life Renault electric car lithium-ion batteries. Renault, which sells electric cars but rents the batteries to their owners, owns and manages some 47,000 batteries from four different models.

Once the batteries have lost 20 to 25 percent of their charging capacity, they are no longer used in cars, but still have enough charging power for stationary power storage.