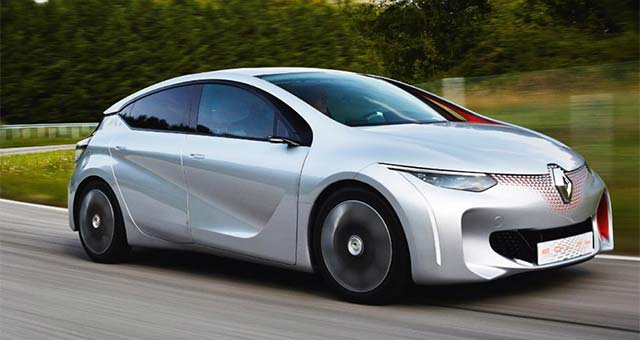 Renault announces EOLAB – an environmental prototype with nearly 100 technological innovations designed to deliver ultra-low fuel consumption, of one litre per one hundred kilometres, whilst maintaining established B-segment levels of performance, practicality and affordability.

Scheduled to have its World Premiere at the 2014 Paris Motor Show on 2 October EOLAB not only previews innovative technology that is destined to be introduced on production Renaults from now until 2020 but also the vision of such a realistic and affordable B-segment car that will appear within 10 years.

EOLAB, which takes its name from combining the name of ‘Aeolous’ God and Ruler of the Winds in Greek mythology, and ‘Laboratory’, is capable of achieving 1L/100km (282mpg) and 22g/km CO2 emissions on the official NEDC cycle.

To achieve such low figures, the designers focused their efforts on three main areas: minimising weight, refining aerodynamics and using “Z.E. Hybrid” technology for all, a brand new initiative which permits zero emissions motoring during everyday use.

Unlike VW’s 313mpg XL1, the EOLAB favours petrol-hybrid propulsion over diesel-hybrid. Powering the EOLAB concept is a hybrid power unit that comprises a 1.0-litre, three-cylinder SCe petrol engine pinched from the new Twingo, producing 74bhp and 70lb ft, and a 67bhp and 148lb ft electric motor powered by a 6.7kWh battery, again reduced in size to compromise between weight and range.

Two driving modes allow the driver to choose between an electric-biased zero-emission mode and a range-biased, hybrid-focused mode. An eleven-inch touchscreen inside relays driving and consumption data to the EOLAB’s occupants.

Technologies geared to achieving ultra-low fuel consumption for all
For Renault, the purpose of EOLAB is to remain true to the company’s DNA by ensuring that ultra-low fuel consumption becomes a reality for as many people as possible. This in turn means making its technologies available at a price that people can afford. EOLAB features materials such as magnesium and aluminium, which are extremely light and also much cheaper than titanium. Meanwhile, the notion of such a car being produced in large numbers within the next 10 years was dialled into the plan from the very start.

100 technological advances for future Renaults
EOLAB is much more than just a styling exercise or a mere shop window. Conceived around a B-segment platform, the prototype incorporates around 100 new, realistic technological developments that are designed to be introduced gradually on upcoming Renault vehicles.

– The car’s shape was designed to slice through air efficiently, while movable devices such as an active spoiler and lateral vanes perform the same way as ailerons.

– A weight saving programme brought the car’s mass down 400kg, thanks in particular to a multi-material body shell combining steel, aluminium and composites, as well as a remarkable magnesium roof that tips the scales at barely 4kg. Saving weight was a virtuous circle since it enabled the size, and therefore the cost of the prototype’s chief assemblies (engine, battery, wheels, brakes, etc.) to be kept low, thereby financing the decision to employ certain more costly materials;

A contribution to the French government’s ‘New Industrial Plan’
EOLAB forms part of the ‘fuel consumption of 2 litres/100km (141 mpg) for all’ plan introduced within the framework of France’s so-called New Industrial Plan. However, EOLAB goes further than the fuel consumption target set by the French government since it sets its sights on the much longer term. In the course of the prototype’s design, Renault developed the technologies necessary for the introduction of a car with fuel consumption of just 2 litres/100km by 2020. To achieve this, Renault worked in a spirit of collaborative innovation with French automotive industry partners like car glass manufacturer Saint-Gobain, seat supplier Faurecia, tyre company Michelin and Continental (brake system). Renault also worked closely with major partners like the Korean company Posco (magnesium components). The specific know-how of all these partners made a valuable contribution to the success of the EOLAB prototype.

EOLAB Concept: a concept car to capture the imagination
Renault’s designers were closely involved with the EOLAB project from its very early days. In the case of EOLAB Concept, they pushed the design parameters to perfect the car’s styling and paid significant attention to detail in order to optimise aerodynamics and weight. With its sloping roof and breathtakingly slender rear end, the concept car’s true purpose is well masked: beneath its seductively designed shell, everything is geared towards frugality. It demonstrates that Renault is able to add a touch of dream-like magic to a prototype whose fundamental mission is to achieve ultra-low fuel consumption.

– Around 100 new, realistic technological developments designed to be introduced gradually on new production Renaults from now until 2020

– Weight savings across the entire vehicle (400kg over equivalent Clio)

Sep 17, 2014Blagojce Krivevski
UC Davis is Most EV-ready Campus in the USNissan to Test the e-NV200 Compact Van in Hong Kong