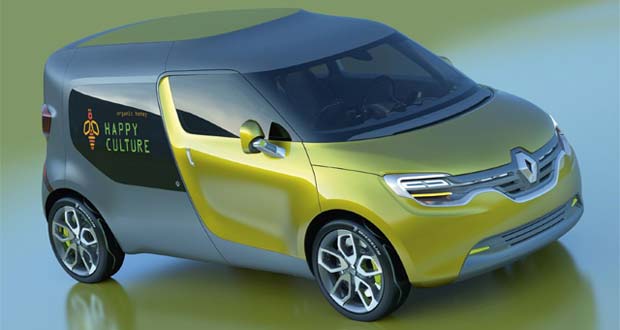 Renault has revealed its latest electric car creation, the Renault Frendzy Concept, ahead of its world premiere at the 2011 Frankfurt Motor Show.

Like the sporty DeZir, which was unveiled at the 2010 Paris Motor Show, Renault Frendzy is an electric vehicle. Its powertrain is the same as that of Kangoo Van Z.E., although the charging point – located under the Renault logo at the front of the vehicle – is identical to that shown on ZOE Preview.

The passenger side feature no glazing or centre pillar, rather a conventional door and a sliding side door with an incorporated 37 inch widescreen display which can be used for advertising and messages. The driver’s side does feature windows, but still no centre pillar. the doors open centrally, to enable ease of access for the family.

Rear passengers are provided with a bench seat, and are provided with a touch sensitive pad which slides out from the back of the driver’s seat to watch films or play games. The interior features an extensive use of wood, linking between practical “work” and “family” modes, echoing the world of camping.

In “work” mode, the rear view mirrors sit upright and the interior lighting is green; “family” mode sees the mirrors swivel to horizontal position and orange lighting for the interior. Magnetic fixings allow the load to be secured to the floor, modular stowage systems provide practical storage.

The dashboard features the new Blackberry PlayBook, ideal for the working day, providing information about deliveries as well as access to the internet.

The BlackBerry PlayBook integrates into the center console, automatically configuring itself to the Renault environment. The Playbook can also be used to control the exterior screen. Sensors located on each door log loading and unloading of packages automatically, using RFID chips which can contain data such as delivery names and address, weights and dimensions, in combination with the Blackberry PlayBook, users have an up to date inventory of items.