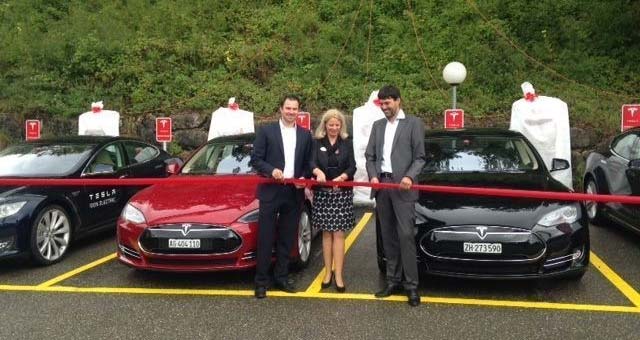 Tesla Motors announced the opening of the new Supercharger in Switzerland. The company is increasing its supercharger network at a breakneck speed across Europe for making a quick charge convenient for its car buyers.

The new Supercharger is located at the motorway A1 in Egerkingen and energizes the routes between Zurich and Bern, Basel to Central Switzerland, and the South of Germany to the Tessin.

The new Supercharger further enables Model S owners to travel to their favorite business or holiday destinations, for free.

Switzerland’s newly energized routes also showcase the importance of the European market for Tesla. The new site is another step towards an extensive Supercharger network in Tesla’s major European markets, including Scandinavia, the DACH region, the UK, Benelux, and France.

Superchargers are strategically placed to allow owners to drive long distances with minimal stops. Supercharging sites are located near amenities like roadside diners, cafes, and shopping centers so road-trippers can stop for a quick meal and have their Model S charged by the time they’re done.

The Tesla Supercharger is one of the most powerful charging technologies in existence, providing up to 135 kilowatts of DC (Direct Current) power directly to the Model S battery using special cables that bypass the on-board charging equipment. Superchargers replenish half a charge in about 20 minutes.[wzslider height=”400″ lightbox=”true”]