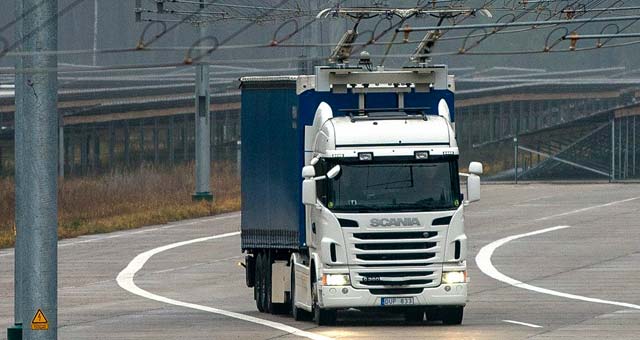 Siemens has been selected by the South Coast Air Quality Management District (SCAQMD) to install an eHighway system in the proximity of the Ports of Los Angeles and Long Beach, the two largest ports in the U.S.

Siemens eHighway is the electrification of select highway lanes via a catenary system which supplies trucks with electric power, similar to how modern day trolleys or streetcars are powered on many city streets, while still offering the same flexibility as diesel trucks. A two-way, one-mile mile catenary system will be installed by Siemens and the system will be demonstrated with different battery-electric and hybrid trucks. The expected result is lower fossil fuel consumption, substantially reduced smog-forming, toxic and CO2 emissions, and lower operating costs.

Siemens and the Volvo Group, via its subsidiary Mack Trucks brand, are developing a demonstration vehicle for the project. Siemens also is supplying current collectors, the technology that allows trucks to connect and disconnect from the catenary system at any speed, to local California truck integrators whose vehicles will also be part of the demonstration.

The catenary infrastructure will be installed on the North and South-bound sections of Alameda Street where it intersects with Sepulveda Boulevard in Carson, California. Up to four trucks will be running in the demonstration, making multiple drives per day. Thanks to an innovative current collector the trucks can connect and disconnect from the catenary system at any speed for dynamic power supply directly to the electric engine and for on-board storage. To further ensure the same flexibility as conventional trucks, the eHighway vehicles use an electric drive system, which can be powered either by diesel, compressed natural gas (CNG), battery or other on-board energy source, when driving outside of the catenary lines.

The project installation will begin immediately with infrastructure commissioned and first truck integrated in order to start the one year demo in July 2015.

“As the first and second busiest container ports in the U.S., Long Beach and Los Angeles can benefit tremendously from the eHighway system, significantly reducing emissions from commercial trucks that normally contribute to much of the air pollution in this region,” said Matthias Schlelein, president of Siemens Mobility and Logistics division in the U.S. “These intricate logistical hubs need to meet increasing local and global demand for goods, and by improving the transportation systems in and around the Port, we hope to help them meet this demand through the use of sophisticated and innovative electrification technology while at the same time improving the local environmental conditions like air quality.” Schelein adds, “the economic logic of the eHighway system is very compelling for cities like LA, where many trucks travel a concentrated and relatively short distance. Highly traveled corridors such as this are where we will initially see eHighway being applied.”

SCAQMD is the air pollution control agency for OrangeCounty and major portions of Los Angeles, San Bernardino and Riverside counties, the most polluted region in the nation. For more than 25 years, its Technology Advancement Office has fostered advanced low- to zero-emission technologies for a wide range of mobile sources, from passenger vehicles to ocean-going ships.