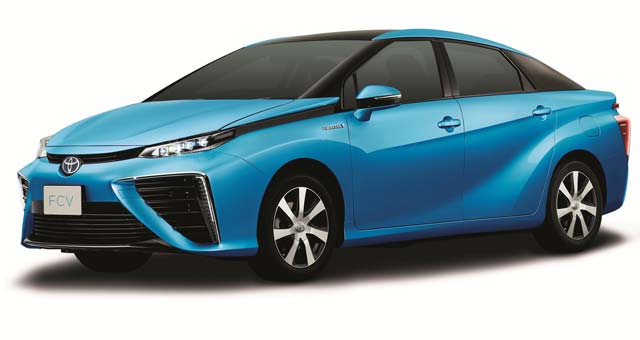 First unveiled in Japan on Wednesday afternoon, the Toyota Fuel Cell Sedan will make its North American debut at the annual conference on Friday, June 27.

In a press conference in Japan, company officials revealed the exterior design of the Fuel Cell Sedan pre-production prototype. Interior features, along with the vehicle’s name, volume, and full specifications will be released later. Toyota also announced that the Fuel Cell Sedan will go on sale in the Japan domestic market before April 2015, and then summer 2015 in Europe and the state of California. The Toyota Fuel Cell Sedan will be priced in the Japan domestic market at approximately 7 million yen, or at more than $68,000 based on current exchange rates. Pricing in other markets has not yet been set.

“This is a zero-emission electric-drive, mid-size four-door sedan” said Bob Carter, senior vice president of automotive operations for Toyota Motor Sales, U.S.A. “It produces sufficient electrical power to spin the electric motor for about 300 miles on a single fill-up which takes three to five minutes.  This is going to be a very special vehicle. And we believe we can bring it in at a very reasonable price for a lot of people.”

“The success of fuel cell technology will depend less on the genius of the car, than on the ownership experience,” said Carter. “Stay tuned, because this infrastructure thing is going to happen.”