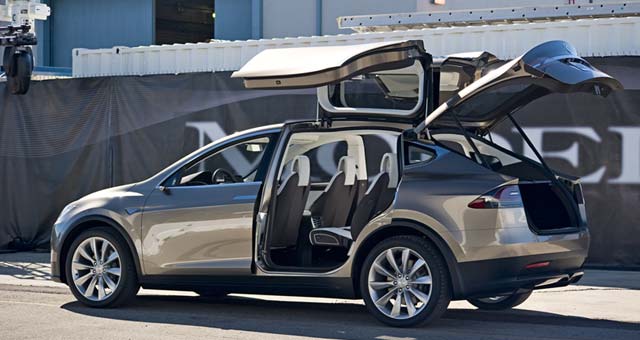 Tesla Motors has provided more details of its forthcoming Model X to those who have reserved the vehicle.

In an e-mail to reservation holders sent on Monday, Tesla said the Model X crossover will come standard with falcon wing doors and all-wheel drive. Third-row seating will be optional. Pricing for the base model or the third-row option was not available.

When it comes to charging and long distance drives, Model X will be able to take full advantage of Tesla’s rapidly growing Supercharger network.

Pre-production vehicles will be built at the former GM and Toyota NUMMI plant in the San Francisco Bay Area from this autumn, with series production set to follow from early 2015.

Tesla unveiled the Model X to the media in February 2012, and had planned to begin deliveries in 2014. According to an SEC filing in March 2013, Model X production was pushed back to late 2014. The filing also said Tesla plans to produce about 10,000 to 15,000 crossovers per year.

Customers can reserve a Model X on the company’s Web site with deposits starting at $5,000.

Next year should also see further development for Tesla’s only current vehicle, the Model S. Sources claim that all-wheel drive is expected to become available, while a long-wheelbase car is also said to be under development.