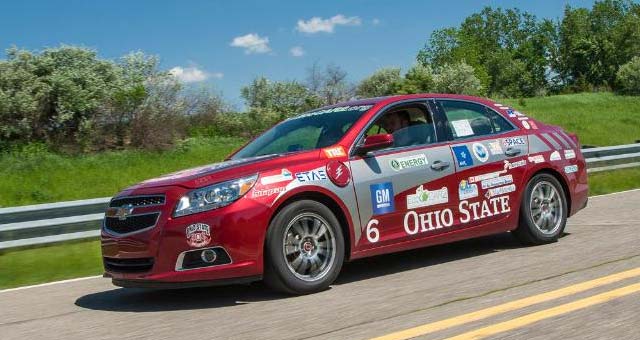 The U.S. Department of Energy and General Motors Co. announced the winning team of the competition, The Ohio State University, as they took home the overall winners title at the EcoCAR 2: Plugging In to the Future finals.

EcoCAR 2 – a three-year competition managed by Argonne National Laboratory and sponsored by the U.S. Department of Energy, GM and 30 other government and industry leaders – gave students the opportunity to gain real-world automotive engineering experience while striving to improve the environmental impact and energy efficiency of an already efficient vehicle – the 2013 Chevrolet Malibu.

Over the course of three years, The Ohio State University consistently met incremental goals that strengthened their position against the other university teams. Their series-parallel plug-in hybrid Malibu excelled at GM’s Proving Grounds in Milford, Michigan, earlier this month, where it was put through a series of strenuous technical and safety tests similar to those used for real-world production vehicles.

“The EcoCAR 2 competition has been an incredible journey and learning experience for everyone at OhioState, and that’s what really matters – winning the top spot is just a bonus,” said Katherine Bovee from OhioState. “We are all excited to take everything we have learned into the workplace after graduation.”

The team’s unique design achieved 50 miles per gallon gas equivalent (MPGGE), while using 315 Watt-hours per mile (Wh/mi­) of electricity. The vehicle impressed the judges with stellar numbers and even lessened the amount of criteria emissions by half, compared to the base vehicle.

“OhioState met and exceeded the EcoCAR 2 goals at every point in the competition,” said Dr. Michael Knotek – Deputy Under Secretary for Science and Energy, U.S. Department of Energy. “Their innovative work has contributed significantly to the future of energy efficient technology in the automotive industry, and we wish all members of the team the best as they move forward in the next step of their careers, whether in the classroom or in the professional world.”

The second-place team from the University of Washington demonstrated the most energy-efficient vehicle, a B20 biodiesel parallel plug-in hybrid reaching 60 MPGGE and 333 Wh/mi of electricity, as well as the lowest well-to-wheel greenhouse gas emissions. PennsylvaniaStateUniversity placed third with their E85 series plug-in hybrid.

“For the past three years all 15 EcoCAR 2 teams have worked tirelessly to design the next generation of clean vehicles and we have seen exceptional outcomes,” said Ken Morris, vice president, global product integrity, General Motors. “OhioState stood out amongst the competition and truly did an outstanding job. All of the teams have helped advance innovative vehicle technology and improve the automotive industry and we thank them for their hard work, dedication and enthusiasm for this program.”