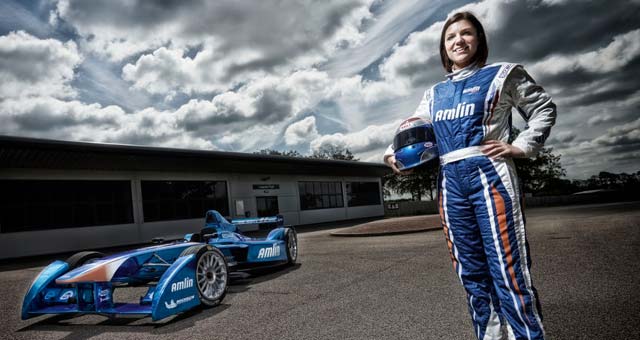 British racer Katherine Legge has become the first female driver and the 11th  in total to be confirmed to race in the new all-electric FIA Formula E Championship after signing for the newly rebranded Amlin Aguri Formula E team.

The 34-year-old former Champ Car racer becomes the first of the team’s two drivers to be announced which has since changed its name from Super Aguri following a new sponsorship deal with leading independent insurance company Amlin.

After rising through the junior single-seater ranks, in 2005 Legge competed in the Toyota Atlantic Championship winning the series opener at Long Beach and ending the season third overall. Later that year she made history by becoming the first woman to test a Formula 1 car since Sarah Fisher (2002) with Minardi. The following year she signed to drive in the 2006 Champ Car season and became the first woman to lead a lap in the series’ history. After a second year she switched to the DTM series enjoying seasons with Futurecom TME and Abt Sportsline. In 2012, Legge moved to the States to make her IndyCar debut, remaining in the US for a second season although this time competing in the American Le Mans Series.

Legge said: “For me this is a really exciting opportunity. The car is fantastic, it looks amazing and it will be very quick. Racing through the streets of the world’s leading cities will be an incredible experience and I think it’s a great chance to bring racing to the people.  We will be driving in their cities on their streets.”

Formula E is the world’s first fully-electric race series designed to appeal to a new generation of motorsport fans, whilst accelerating the interest in electric vehicles and promoting sustainability. Competing entirely on city-centre circuits – with races in China, Malaysia, Uruguay, Argentina, US, Monaco, Germany and the UK – it uses cars capable of speeds in excess of 150mph (225kph). Its 10 teams feature some of the leading international names in motorsport including Alain Prost and Michael Andretti, along with high-profile environmental supporters including Sir Richard Branson.