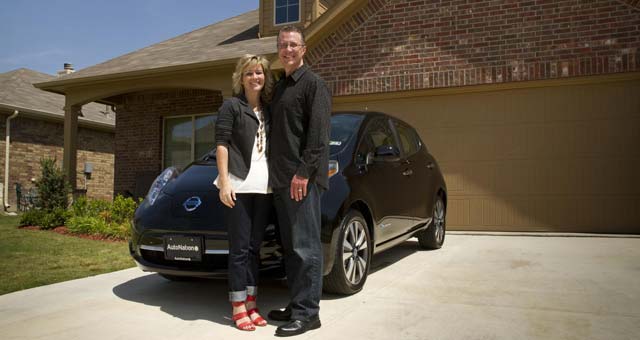 Nissan achieved another milestone this month as Dallas residents Todd and Lisa Bolt made Nissan LEAF the first all-electric model to hit 50,000 sales in the U.S. The Bolt family took delivery of their black LEAF SL earlier this month at AutoNation Nissan of Lewisville.

Thanks to enthusiastic owner advocates, robust public charging infrastructure and the launch of a successful free charging promotion, Dallas – and the state of Texas – have become hot growth markets for LEAF. So far in 2014, LEAF sales in the Dallas-Fort Worth metroplex have grown by about 50 percent over the previous year, with that growth set to accelerate faster thanks in part to the introduction of a new state tax rebate of up to $2,500 on the purchase or lease of a new Nissan LEAF.

“Beyond the simple economics of not buying gas, we’ve been impressed with how well the LEAF drives,” said Todd Bolt, a pastor at Gateway Church in Southlake. “When we show the LEAF off to family and friends, they’re surprised that the car is so quiet and rides so well. The LEAF does everything we need day-to-day, and given the financial savings, I don’t know why we’d buy another gas car.”

Electric vehicle ownership has taken hold at Gateway Church, where both Todd and Lisa work, after an executive pastor did the math and decided to buy a Nissan LEAF. Now, more than 20 employees are in the fold, jokingly referring to themselves as the “Blessed LEAFs Club.”

Dallas-Fort Worth and Houston are among 10 launch markets for “No Charge to Charge,” a new promotion that provides two years of no-cost public charging to new LEAF buyers who took delivery of their car after April 1, 2014. The national promotion is modeled after a successful pilot program launched in Dallas and Houston last fall with Houston-based NRG eVgo.

“With ‘No Charge to Charge,’ the new EV tax credit and enthusiastic new owners like the Bolt family, Dallas is poised to climb the ranks of leading LEAF sales markets,” said Toby Perry, director, EV Marketing for Nissan. “Texas is a great indicator that the right mix of customer awareness and strategically placed charging can lead to rapid EV adoption, and we expect to use that model to grow our sales in markets across the U.S.”

With nearly 115,000 global sales since launch, Nissan LEAF is the world’s top-selling electric vehicle. LEAF seats up to five passengers and boasts an estimated driving range on a fully-charged battery of 84 miles and MPGe ratings of 126 city, 101 highway and 114 combined. With a starting price of less than $30,000, LEAF is competitively priced with similar gas-powered cars after applicable tax credits, while providing the benefits of lower running costs and less scheduled maintenance.

LEAF is powered by an advanced lithium-ion battery and an 80kW motor that provides a highly responsive, fun-to-drive experience. A Nissan LEAF can be charged to 80 percent of its full capacity in about 30 minutes using its available quick charge port and a quick charger. Charging at home through a 220V outlet is estimated to take approximately five hours with the 6.6 kW onboard charger (approximately eight hours with the S grade’s standard 3.6 kW charger).