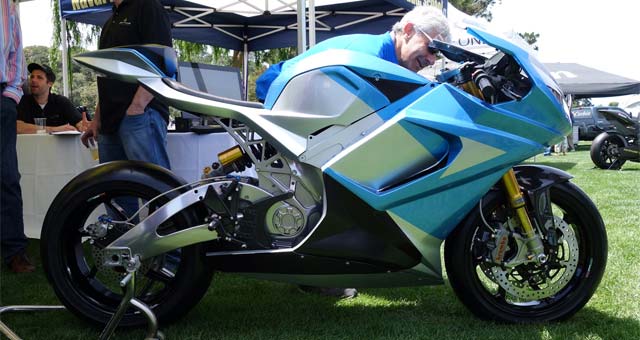 The Lightning LS-218 presents the first opportunity that consumers can purchase a production motorcycle capable of setting land speed records and winning road racing competitions that is as easy to ride as a 250cc commuter bike. Lightning’s LS-218 IPM liquid cooled 10,500 rpm electric motor can produce in excess of 200 hp and 168 ft/lbs of torque.

You can use standard power outlets to charge LS-218. At public fast charging stations, it will take less than 30 minutes to charge.

The Lightning LS-218 is a direct street legal version of the same bike that won AMA and FIM races and set landspeed records. Lightning set the first land speed record for an electric motorcycle (166 mph), then broke the 200 mph barrier two years later when it clocked 215.9 mph – just a tailwind away from its theoretical 218 mph top speed.

The Lightning LS-218′s can compete with the best ICE alternatives today. In June 2013, at Pikes Peak, Lighting won first overall competing against 93 other motorcycle teams (electric and gasoline) by over 20 seconds.

“Since 2006 the Lightning team has been dedicated to developing electric motorcycles that meet and exceed the performance of the best ICE (Induction Combustion Engine) alternatives”, said Richard Hatfield, CEO of Lightning Motorcycle.“ To have broad acceptance from the motorcyclist community,we need to provide design, performance and value that competes head to head with the best gasoline motorcycles on the market. Lightning’s R&D team has developed electric vehicle technology through years of competition at racing events around the world. We believe that the LS-218 offers consumers the best of design, performance and value in today’s market.”[wzslider height=”400″ lightbox=”true”]