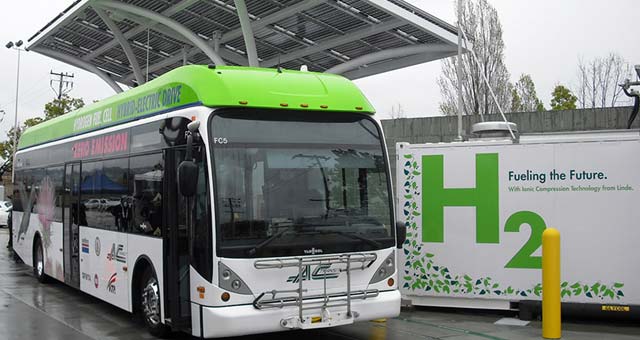 In California’s latest effort to advance hydrogen transportation, the Energy Commission and the Air Resources Board announced that California has joined H2USA, a public-private partnership led by the U.S. Department of Energy.

H2 USA is dedicated to accelerating the commercialization of clean transportation solutions, primarily fuel cell electric vehicles (FCVs) and a fueling infrastructure that will make these vehicles more accessible and affordable.

California’s pledge to join H2USA adds the state to the growing partnership of government agencies, automakers, gas suppliers, and the hydrogen and fuel cell industries.

The partnership will identify actions designed to encourage early adopters of fuel cell vehicles, conduct coordinated technical and market analyses, and evaluate approaches to an alternative fueling infrastructure that drives cost reductions and economies of scale.

California leads the nation in energy efficiency standards and promoting zero-emission vehicles (ZEVs), and plays a lead role in environmental protection; however, it is the 12th largest emitter of carbon dioxide worldwide. In 2006, AB 32 (Nunez/Pavley) was signed into law, setting a California target to reduce greenhouse gas emissions to 1990 levels by 2020. In 2008, SB 375 (Steinberg) directed the California Air Resources Board to set regional targets for reducing greenhouse gas emissions from passenger vehicles.

In March 2012, Governor Brown issued an Executive Order directing state government to help accelerate the market for ZEVs in California. The order set a goal of establishing an infrastructure to support one million ZEVs in California by 2020 and to have 1.5 million ZEVs on California roadways by 2025. Since then, seven other states, comprising more than 30% of the total national vehicle fleet, signed an agreement to work together to put 2.2 million ZEVs on the roads of their respective states by 2025.

The Air Resources Board also set aggressive goals for lowering the emissions of vehicles by controlling smog, soot, and global warming gases and through requirements for greater numbers of ZEVs into a single package of standards—Advanced Clean Cars—for vehicle model years 2017 through 2025.

In September 2013, the Legislature passed and the Governor signed AB 8 (Perea), re-authorizing the Energy Commission’s successful Alternative and Renewable Fuel and Vehicle Technology Program (ARFVTP). To date, the ARFVTP has provided more than $400 million to more than 260 alternative fuel, infrastructure, and vehicle technology projects. Reauthorization of the ARFVTP continues annual program investments of $100 million, and dedicates $20 million of this amount to the installation of hydrogen fueling infrastructure supporting the deployment of fuel cell vehicles.