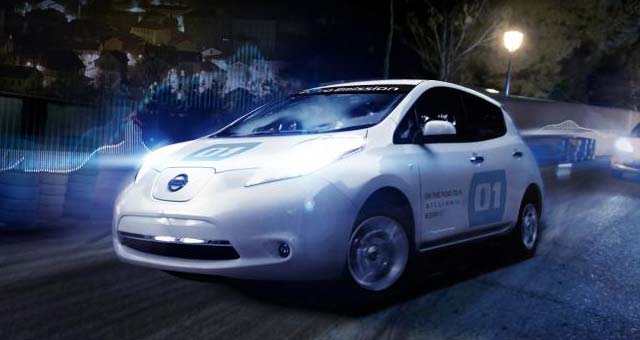 To mark the 19th annual International Noise Awareness Day (INAD), Nissan has taken to the streets of one of Europe’s quietest villages during the middle of the night with a silent “ride” of its 100% electric Nissan LEAF.

The activity, complete with a start and finish line in Provence Alpes Côte d’Azur, was designed to demonstrate the noise reduction levels of the Zero Emissions car compared to traditional combustion engines.

The World Health Organisation (WHO) states at least 13.5% of Europeans are exposed to road traffic noise at levels exceeding 55 dB, which is considered detrimental to human health. The medical effects of noise levels include insomnia (50dB), obesity (50dB), psychic disorders (60dB) and reduction in life expectancy (50dB). As a result, Nissan has filmed a ‘silent ride’ to help support INAD in raising awareness about noise pollution levels across Europe.

The video stunt, filmed in one of Europe’s quietest villages in the early hours of the morning, shows four Nissan LEAF vehicles racing around the backstreets at high speeds without waking anyone up. Members of the village were filmed while they slept to monitor their reactions.

The running noise of the Nissan LEAF engine is 21dB, recording less noise than a ceiling fan (26dB) – which is way below the World Health Organisation’s night time noise target for Europe (40dB).

Launched by the Center for Hearing and Communication (CHC), INAD aims to raise awareness about the dangers of exposure to noise on hearing and health – including emotional and physical health problems such as impaired mental performance, high blood pressure and increased risk of motor vehicle injuries.

Launched four years ago, the zero emissions Nissan LEAF continues to provide consumers with the benefits of an all-electric car – a quiet and dynamic driving experience, lower operating costs, the increased convenience of charging at home and less scheduled maintenance – at a price after tax incentives that rival comparable gas-powered vehicles.

The United Kingdom, France and Italy are the countries worst affected by traffic noise during the day (levels higher than 55dB), resulting in higher risks of cardiovascular diseases and premature death.

Europe‘s noisiest countries in the day