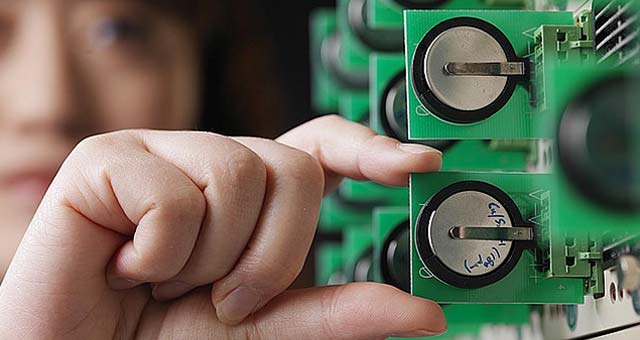 Electric vehicles could travel farther and more renewable energy could be stored with lithium-sulfur batteries that use a unique powdery nanomaterial.

Researchers added the powder, a kind of nanomaterial called a metal organic framework, to the battery’s cathode to capture problematic polysulfides that usually cause lithium-sulfur batteries to fail after a few charges. A paper describing the material and its performance was published online April 4 in the American Chemical Society journal Nano Letters.

“Lithium-sulfur batteries have the potential to power tomorrow’s electric vehicles, but they need to last longer after each charge and be able to be repeatedly recharged,” said materials chemist Jie Xiao of the Department of Energy’s Pacific Northwest National Laboratory. “Our metal organic framework may offer a new way to make that happen.”

The reason can be found in how batteries work. Most batteries have two electrodes: one is positively charged and called a cathode, while the second is negative and called an anode. Electricity is generated when electrons flow through a wire that connects the two. To control the electrons, positively charged atoms shuffle from one electrode to the other through another path: the electrolyte solution in which the electrodes sit.

The lithium-sulfur battery’s main obstacles are unwanted side reactions that cut the battery’s life short. The undesirable action starts on the battery’s sulfur-containing cathode, which slowly disintegrates and forms molecules called polysulfides that dissolve into the liquid electrolyte. Some of the sulfur — an essential part of the battery’s chemical reactions — never returns to the cathode. As a result, the cathode has less material to keep the reactions going and the battery quickly dies.

New materials for better batteries
Researchers worldwide are trying to improve materials for each battery component to increase the lifespan and mainstream use of lithium-sulfur batteries.  For this research, Xiao and her colleagues honed in on the cathode to stop polysulfides from moving through the electrolyte.

Many materials with tiny holes have been examined to physically trap polysulfides inside the cathode. Metal organic frameworks are porous, but the added strength of PNNL’s material is its ability to strongly attract the polysulfide molecules.

“The MOF’s highly porous structure is a plus that further holds the polysulfide tight and makes it stay within the cathode,” said PNNL electrochemist Jianming Zheng.

Nanomaterial is key
Metal organic frameworks—also called MOFs—are crystal-like compounds made of metal clusters connected to organic molecules, or linkers. Together, the clusters and linkers assemble into porous 3-D structures. MOFs can contain a number of different elements. PNNL researchers chose the transition metal nickel as the central element for this particular MOF because of its strong ability to interact with sulfur.

During lab tests, a lithium-sulfur battery with PNNL’s MOF cathode maintained 89 percent of its initial power capacity after 100 charge-and discharge cycles. Having shown the effectiveness of their MOF cathode, PNNL researchers now plan to further improve the cathode’s mixture of materials so it can hold more energy. The team also needs to develop a larger prototype and test it for longer periods of time to evaluate the cathode’s performance for real-world, large-scale applications.

PNNL is also using MOFs in energy-efficient adsorption chillers and to develop new catalysts to speed up chemical reactions.

This research was funded by the Department of Energy’s Office of Energy Efficiency and Renewable Energy. Researchers analyzed chemical interactions on the MOF cathode with instruments at EMSL, DOE’s Environmental Molecular Sciences Laboratory at PNNL.