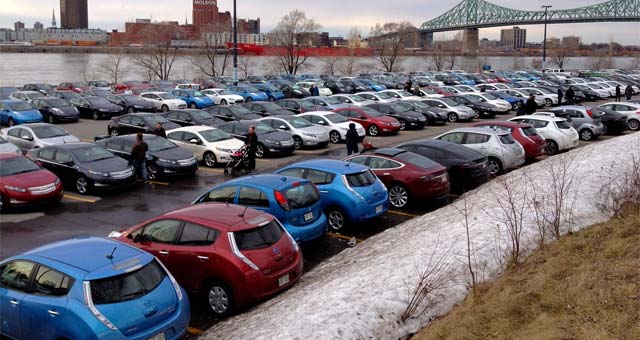 A Guinness World Record attempt to assemble the “largest parade of electric vehicles” was attended by 431 vehicles in Montreal, a much larger gathering than the previous world record parade of 305 cars set in Zurich last July.

All-electric vehicles and plug-in hybrids, electric trucks and electric motorcycles assembled at the Gilles Villeneuve Racetrack on the Île Sainte-Hélène, along the Saint Laurence River in Montreal, just south of the JacquesCartierBridge.

It was part of Get Connected Day, or Journée Branchez-Vous, the third annual event celebrating electric vehicles organized by Le Centre national du transport avancé (CNTA), which translates as the National Center of Advanced Transportation.

The record-breaking electric vehicle parade is not yet officially recognized by the Guinness organization, but it has been submitted by the CNTA.

The hundreds of Nissan LEAFs, Tesla Roadsters, Mitsubishi i-MiEVs, Ford Focuses and Chevrolet Volts that gathered for the parade were joined by a Bolloré BlueCar from the Paris car sharing service Paris AutoLib, and a Porsche that had been converted to electricity.

The passion for electric transportation ran high among participants, many of whom expressed their pleasure in seeing so many electric cars in one place and one time. Some said they have often felt isolated, finding just one “electromobiliste” from time to time on the province’s roads.

Two Parti Québécois politicians attended the parade to lend their support to the electric vehicle community.

Former Minister of Natural Resources Martine Ouellet and former Environment Minister Daniel Breton were present at this record attempt and took the opportunity to acknowledge the work of transport electrification that was done by the Parti Québécois government in the 18 months from September 2012 through April 7, 2014, when a Liberal government was elected.

Breton said that he intends to continue to dedicate his career to pursuing this social project, an announcement which was warmly applauded by the crowd.

Quebecois electric vehicle owners gathered in Montreal for Journée Branchez-Vous to demonstrate that EVs are a viable and interesting option, the organizers said.

With more than 250 charging stations installed in 57 cities across Quebec, the utility Hydro-Quebec says its Electric Circuit allows EV drivers to travel worry-free.

As part of the province of Quebec’s transportation electrification program, would-be buyers are being offered substantial rebates for buying or leasing electric cars — up to $8,000 for a car and up to $1,000 for a charging station.

The province has allocated $516 million toward its 2013-2017 electrification strategy. Some of that money will go to installing more than 3,000 charging stations.